The Spring Bank Holiday weekend on May 23rd – 25th was another highly successful weekend for the Blackpool tramway with a frequent and well patronised Flexity service complemented by an enhanced heritage service over all three days. A total of eleven different traditional trams ran over the long weekend, with six or seven different cars out on each day, and what follows is a brief summary of what happened!

The weekend’s heritage excitement kicked off on Saturday 23rd May with the green timetable in operation, utilising four heritage cars and adopting a green and cream theme. The initial chosen four were Standard 147, Boat 600, Centenary 648 and Balloon 715 with the latter making its debut following the application of new between-deck adverts. Unfortunately the day was characterised by a number of less pleasant developments, with a passenger being taken ill on a service tram which caused considerable disruption to both old and new trams. Meanwhile, both 147 and 715 suffered compressor problems during the afternoon and had to run in early, whilst Boat 600 also retired due to some problems being experienced with its trolley pole. As a result, replacements were sent out in the shape of Boat 230, Brush Railcoach 631 and ‘Princess Alice’ 706 – meaning that remarkably, the only tram which completed the full day in service was the notoriously unreliable 648! Despite these setbacks, it was a good day for the tramway no doubt helped by fine sunny weather, and the finale was provided by a trip to Fleetwood Ferry performed by car 706.

The now well-established gold heritage service returned on Sunday 24th May with two green, two red and two brown trams rostered. These consisted of: Standard 147, Boat 230, Boat 227, Balloon 701, Box 40 and Bolton 66. The weather was noticeably cooler than on the previous day and as a result 230 was swapped for Brush car 631 after completing a trip to Fleetwood and back in the morning. This proved more complex than anticipated when the points at Manchester Square refused to co-operate, so the Boat was sent to Starr Gate and stabled inside the new depot there and its crew then returned to Rigby Road to collect 631. All of the morning cars made it to Fleetwood as planned at ninety minute intervals apart from 40 which was confined to running between Pleasure Beach and Little Bispham for the second consecutive gold event day, apart from its first northbound run which terminated at Bispham instead.

Bank Holiday Monday 25th May was another dry day slightly spoilt by a chilly wind on the promenade. This day saw another colourful selection of trams out and about, comprising of Box 40, Bolton 66, Boat 227, Brush car 631, ‘Princess Alice’ 706 and Balloon 711 which was the only member of the ‘B Fleet’ to be used all weekend. This time there were no difficulties and the same six trams were still out at the end of the day! After the trams took it in turn to run to Fleetwood, the day concluded with an extra treat as 227 and 711 both headed to the northern end of the line together after 16:00, before posing side by side at the Ferry and then running in tandem back to North Pier to unload and then head back to Rigby Road empty. Healthy loadings were observed on the heritage cars and it was especially pleasing to see many families riding as well as the familiar faces, which will of course be essential if these tours are to do well. Although the likes of 66 and the Boats have always been very popular with the general public, your writer was quite surprised to see how many non-enthusiasts seemed to be riding on 631 of all things!

It is great to see the heritage events in Blackpool grow in popularity and the number of people who are coming to ride on the trams after seeing the publicity brochures published this year is most encouraging. Only four weeks to go until the next gold event day, but if you can’t wait that long don’t forget that the blue promenade timetable is running daily until 31st May for the school holidays! 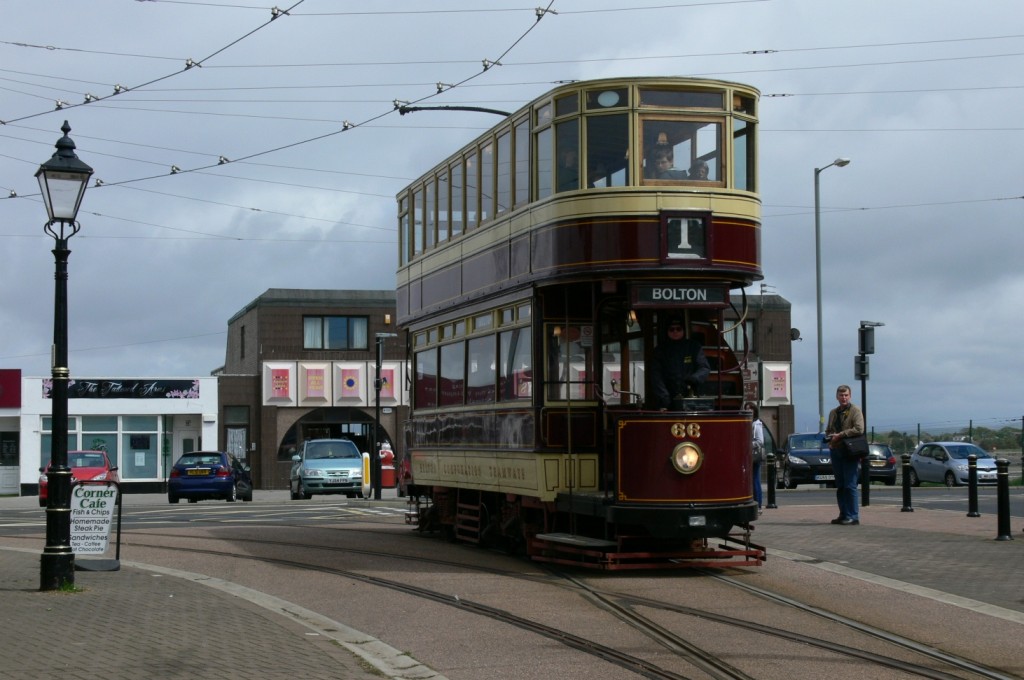 Bolton 66 always makes a splendid sight in Fleetwood, and so it does here as it rounds the curve onto Pharos Street on the afternoon of 25th May. 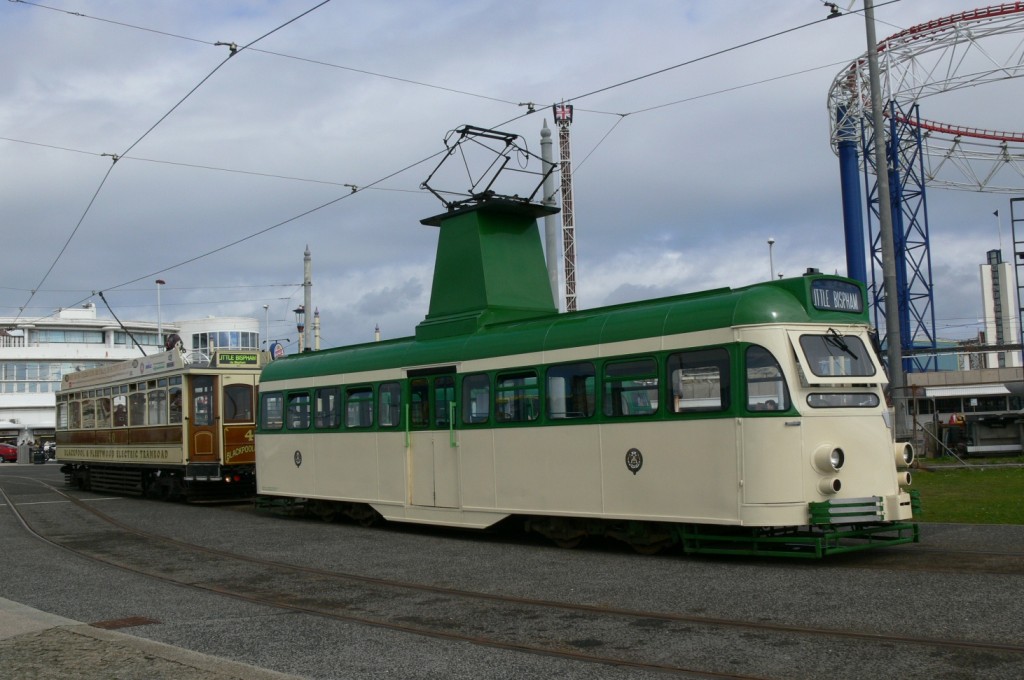 Brush car 631 ran on all three days of the weekend, and is seen here at Pleasure Beach along with an even older stalwart of the North Station to Fleetwood route, Box car 40. (Photos x 2 by Andrew Waddington)