Posted on Wednesday 29 April 2015 by Gareth Prior

It is time for another international tram to feature in “Picture in Time” today – New York Third Avenue 674. As with many other trams which have been included in this series 674 is part of the national collection at Crich.

Built in 1939 674 was constructed in the Third Avenue Transit Company’s own workshops and is a “Z” class tram – designed for one man operation. In the end 674 did not operate for long on its native tramway and in the 1940s it was to be one of 42 trams from New York to be transported across the Atlantic as part of the American Marshall Plan in the aftermath of World War Two. Entering service in Vienna the tram was renumbered 4225 and ran there until 1969. Withdrawn from service the tram was accepted by Crich and arrived in Derbyshire in April 1970. Running as 4225 the tram was used between 1970 and 1975 and then from 1977. In 1979 it was returned to its New York identity and remained as part of the operating fleet until 1985 when it was withdrawn from service once again. In recent years it was one of the main exhibits in the PCC exhibition in the depots at Crich and although this display has now been removed 674 remains in situ.

Our photo is taken at the Town End terminus and shows 674 in the company of Johannesburg 60. 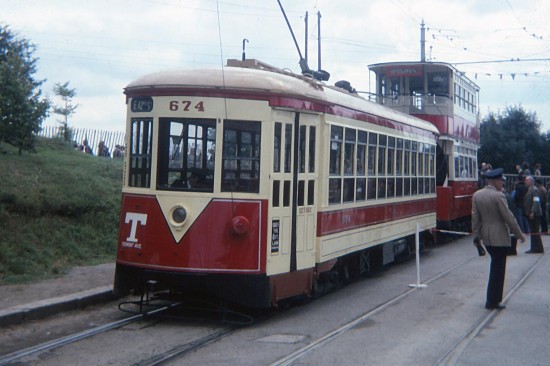