Weather turns out not so nice for Boat 604!

The highly anticipated launch of Blackpool’s George Formby tram, Boat car 604, took place on Saturday 9th June. As seems to have become the norm for the return of open Boat cars, the weather on the day was far from kind but in spite of the damp conditions, 604‘s appearance helped to brighten up an otherwise dismal day and its sponsors braved the rain to ensure that the tram was welcomed back into service in fine style.

Prior to this event, 604‘s last appearance on the promenade had been on the evening of Saturday 25th September 2010 when it operated in service from North Pier to Bispham and then back to depot after completing an illumination tour. Since then the tram has been completely repainted in 1970s style livery thanks to the sponsorship of the George Formby Society, making it the first Boat tram to carry this livery since 1995. The tram has also been named ‘George Formby MBE’ with wooden name boards fitted to alongside the centre platform doors, rather than on the central canopy as on sister car 600. Black and white images of the legendary entertainer have also been applied on circular discs within the trolley tower. It appears to have received some other remedial attention as well, highlighted by the bright yellow strips on the edges of the centre platform area.

The official launch of 604 was held at North Pier on Saturday 9th June at 2:00pm. Unfortunately, in scenes reminiscent of the debut of its sister car 236 at Crich six days earlier, the weather was miserable although the rain did thankfully stop in time for the ceremony itself. By the time the car arrived at North Pier, a strong gust of wind had blown back a curtain affixed to the side panels, revealing the name plate a little earlier than planned! However, there was one more surprise in store for the crowds who had gathered to welcome the tram back into service. The fleet numbers had remained covered up, and when the stickers were removed, this revealed that the car has regained its original fleet number – 230. This means that, of the four active Blackpool Boat cars in the UK, only one now carries it post-1968 number, that being prototype 600 which is also still in Blackpool.

The poor weather meant that the planned ceremonial journey from North Pier to Pleasure Beach by the tram’s sponsors was cancelled. Instead, George Formby Society members boarded 230 for a ride to the Imperial Hotel, where their annual convention was taking place.  The tram full of ukulele players was certainly a memorable sight for those who witnessed it! Once the passengers had disembarked, 230 ran to Cabin where it reversed, the crossover there being rare territory for a trolley-fitted tram. It then headed back to Rigby Road, although in a welcome move passengers who had purchased a heritage tour day ticket were allowed to travel back on the tram to bring this eventful launch to a close.

Better weather the following day saw 230 allocated to the heritage service for a much longer period of time, initially alongside Centenary car 648 to offer what was perhaps the best day of these tours since their introduction on Good Friday, thanks to the welcome return of these two old friends. Later in the day, Boat 600 came into traffic due to a fault with 648, meaning that two Boats were running together for the first time since October 2010! Hopefully better weather during the summer will allow 230 to see regular use and add extra variety to the pool of historic trams available for use. 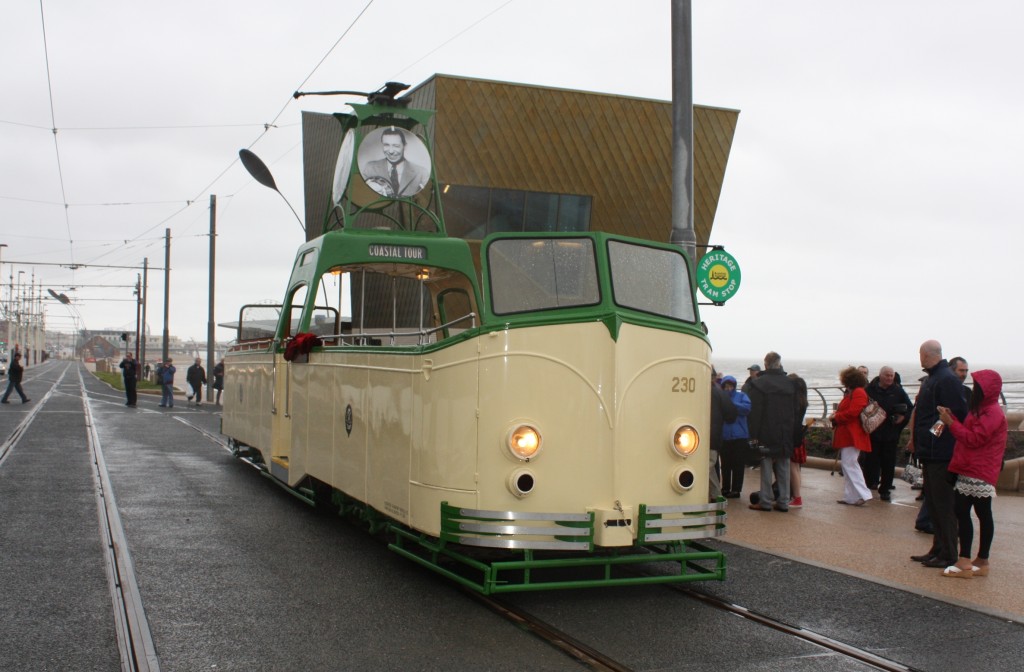 Boat 604 - now officially unveiled as 230 - seen on the spare track at North Pier in all its glory, with gold fleet numbers, trolley tower discs and name boards all clearly visible. (Photo by Andrew Blood) 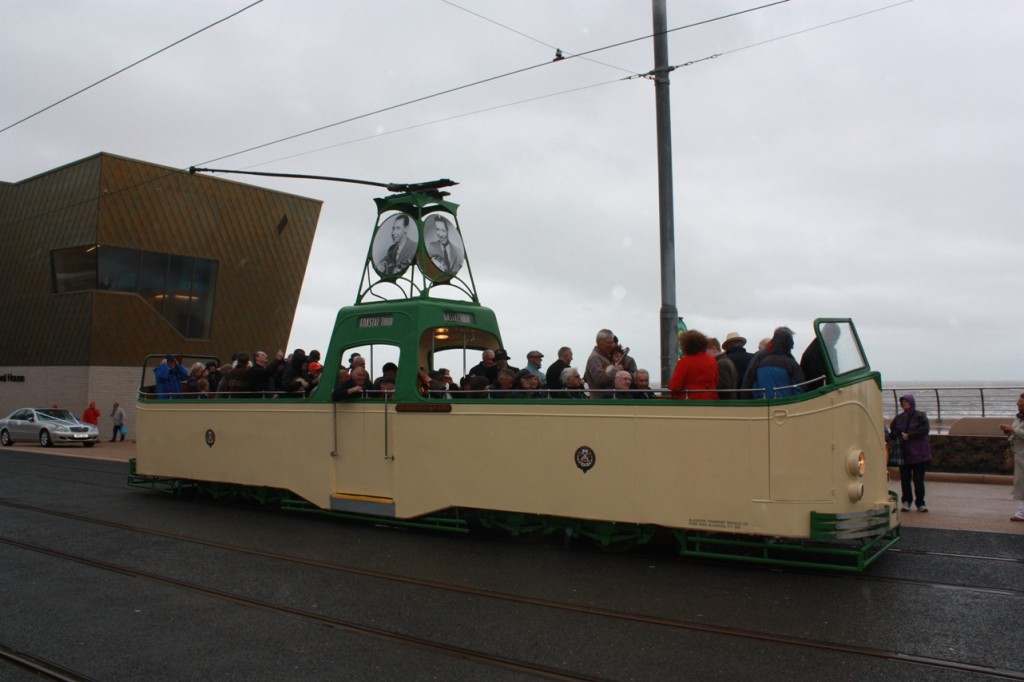 Another view of 230, now fully loaded with George Formby Society members eager to sample a ride on the tram namd after their hero. (Photo by Andrew Blood)

2 Responses to Weather turns out not so nice for Boat 604!