Progress on the construction of the third and final track into the new Lakeside Depot at the Heaton Park Tramway, confusingly known as Track 1, has been nothing short of astounding since work on this task commenced earlier this month. In just a few short weeks, track has been laid right up to the depot doors – and on Tuesday 24th February another milestone was achieved, when rails were laid inside the building itself.

It is now very hard to believe that, just three weeks ago, Track 1 did not exist. Since our previous report on early progress and the fact that Blackpool Vanguard 619 had tested out the short length of new track, progress has been very rapid. Within a week, track and sleepers had crept right up to the front of the depot. The delivery of further sleepers on Tuesday 24th February enabled even more progress to be made, with the track being extended further still, into the depot itself. A real visible sign of progress was then achieved when the tramway’s resident multi-purpose works car, Blackpool 1, ventured onto the newly laid rails and into the depot – duly becoming the very first tram ever to enter Lakeside Depot on Track 1. This also gave the amazing sight of three trams stabled side by side at the front of the shed, something which had never been seen before at Heaton Park, but which will now become commonplace.

There is still further work to be done however; the recently laid track will need some further attention and this will need to be extended to the back of the depot, which will need to be cleared of various accumulated bits and pieces. However, the recent developments are still very impressive and deserve to be celebrated! It is aimed to have the track ready for use by late March, ready for the expected arrival of Blackpool 280 at the park once its current loan period at Beamish Museum concludes. The car is due to operate at its current home for the final time over the weekend of 7th & 8th March before it finally makes the journey to Manchester, some five years after being bought by the MTMS. A launch for the car into public service is provisionally planned for late April, with a mini Blackpool-themed event expected to be held to welcome the newest addition to the resident tramcar fleet. With Hull 96 set to be re-launched at another special event on June 28th after extensive renovation and Stockport 5 also expected to be back in service by late summer following workshop attention, 2015 is shaping up to be a very special year at Heaton Park and one that will hopefully cement the tramway’s status as one of the most progressive and exciting heritage lines in the country. 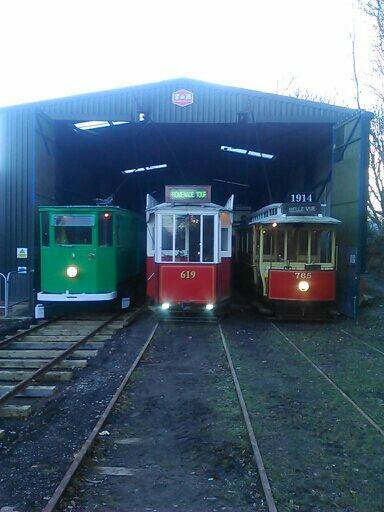 Never seen before - but here it is: three trams stand side by side in the Heaton Park Tramway's Lakeside depot. Pictured from left to right are Blackpool 1, Blackpool 619 & Manchester 765. (Photo by Joe Savage)