Posted on Friday 24 October 2014 by Gareth Prior

Manchester Metrolink have waved goodbye to another T68 with the departure of 1017 late on Thursday 23rd October. This is the 19th of the combined T68/T68A fleet to make the move across to Booths in Rotherham for scrapping and there are now just seven of the vehicles still waiting to be sent for scrapping.

1017 originally arrived in Manchester on 18th February 1992 and entered service on 27th April 1992. It was officially withdrawn on 21st January 2014. During its near 22 year career probably its biggest claim to fame was the application of Bury Hospice name stickers with the naming taking place on 13th May 2001 and it retained these until the end. It was also the last T68 to call at Woodlands Road with a city bound service on 13th December 2013 before that stop was officially closed.

Speaking of Bury Hospice you may remember that the profits from the sale of SUPERB, the excellent book on the history of the T68 and T68As by Andrew Coward and John E Henderson, were being donated to that very worthwhile organisation. It can now be revealed that, with just 300 copies of the book still available, £2,050 has been raised for the hospice. Once the 300 copies of the book have been sold there will be no reprint so if you haven’t got your copy yet, why not? It is possibly the best UK light rail book released yet and no bookshelf is complete without it.

Back to Metrolink and 1021 has now moved into the workshops where it is undergoing final component recovery and this vehicle is likely to be the next to make the trip to South Yorkshire.

And M5000 3089 has now been moved to Trafford Depot and is expected to enter service shortly whilst the next arrival in the form of 3090 is due on Saturday 25th October. 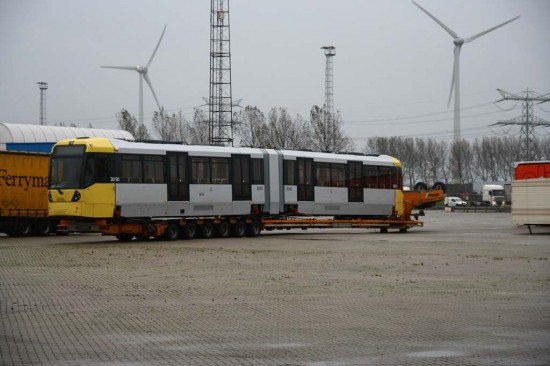 6 Responses to Another T68 leaves Manchester