The first phase of the 2014 stage of rail replacement work on Stagecoach Supertram has now been completed with works in the Hillsborough and Malin Bridge areas now completed. The final part of this phase saw the double track and points replaced leading into Malin Bridge terminus with this completed by Monday 21st April when trams returned here but instead of running all the way to Halfway they are diverted to Herdings Park for the next few weeks due to rail replacement works on White Lane.

Sunday 20th April also saw an unusual service with all Blue route services running between Halfway and Middlewood – for one day only. This was because Malin Bridge was still closed due to the works mentioned above but all other works had been completed allowing this strange service to operate.

During this second phase of works on White Lane no trams will be able to run through to Halfway and all Blue route trams will now run to Herdings Park, replacing the Purple route trams at peak trams although off-peak a Purple route service will operate between Cathedral and Herdings Park. The Yellow route is back up and running a normal service between Middlewood and Meadowhall but with the extra Purple route trams to Meadowhall this does mean the transport interchange and shopping centre will be receiving a slightly less frequent service for a few weeks. This latest phase of works is scheduled to be completed by mid-May. 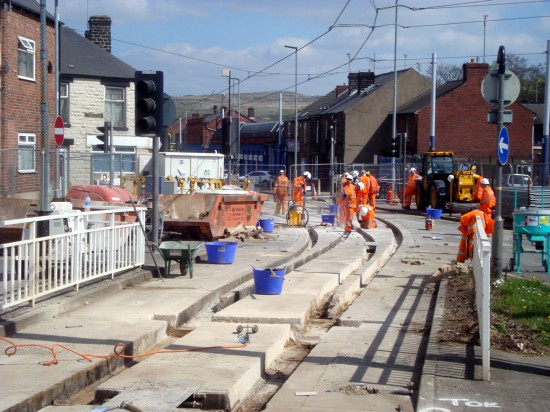 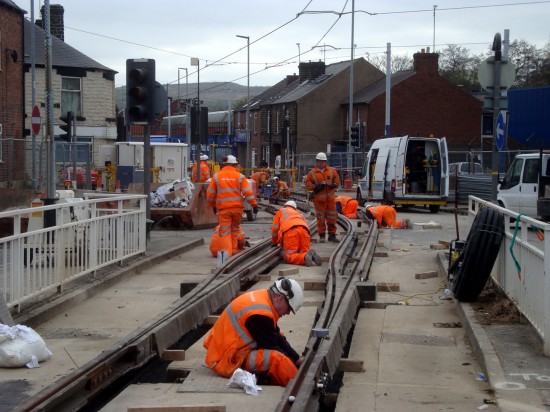 Two photos taken on 18th April showing the ongoing work on the approach to Malin Bridge to replace the tracks. 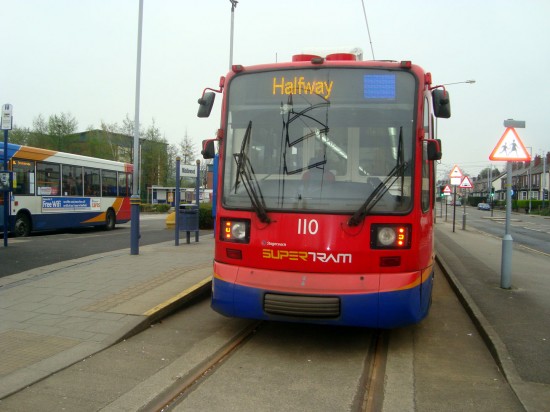 For one day only, on 20th April, Blue route trams ran between Halfway and the usual Yellow route terminus at Middlewood. This view shows the unusual sight of 110 on a Blue route service at Middlewood. (All photos: Stuart Cooke)