Since moving to the Birkenhead tramway in August 2010 after being sold to Merseytravel, Blackpool Brush Railcoach 626 has hardly ever been seen by members of the public, spending most of its time tucked up inside the Pacific Road depot building. However, some members of the Merseyside Tramway Preseravtion Society required access to the building on Friday 21st March 2014, and thanks to this we have a rare shot of this tram in its current surroundings.

As most readers will probably be aware, 626 has never been used in passenger service at Birkenhead and as its owners seem to have withdrawn their interest in taking over the tramway there, its future remains unclear. Merseytravel are unwilling to insure a tram to run on someone else’s tramway, and the MTPS cannot justify the expense of doing so, leaving poor old 626 in limbo even though it arrived in a fully serviceable condition.

On 21st March, members of the MTPS required access to the Pacific Road complex to switch off the overhead power for the tramway, in order to inspect the overhead frogs and to repair a broken spring on the Pacific Road loop frog. Whilst inside, John Hewitt couldn’t resist taking a photo of Blackpool 626 – which still looks very smart despite its long period of disuse, having been repainted just a few months before it left Blackpool – and the result can be seen below! 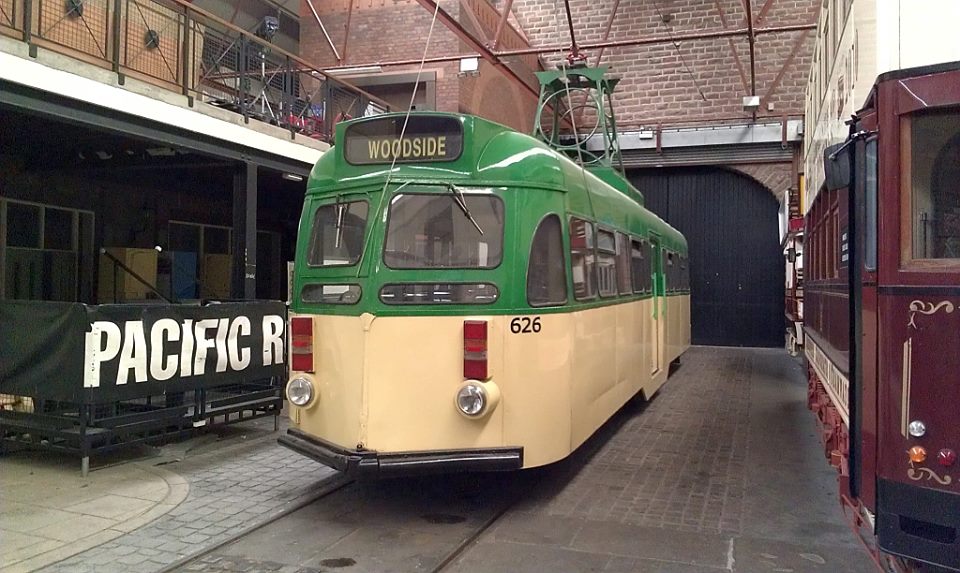 Displaying an appropriate Birkenhead destination, Brush car 626 stands silently in the Pacific Road depot, where it has spent most of the last three and a half years. On the right, Liverpool horse car 43 and Hong Kong 70 are just visible. (Photo by John Hewitt)

1 Response to A rare look at Blackpool Brush car 626