As part of the continued testing and commissioning of the Edinburgh Tram line ahead of its opening later this year volunteers are being sought to help officials evaluate crowd management procedures. The event will take place on Thursday 13th March at the Murrayfield stop and up to 1,000 members of the public are required with one of the benefits of volunteering being that you get to ride on the tram before it officially opens to the public!

Exercise Salvador will enable Edinburgh Trams to undertake a number of realistic exercises to test operational and safety procedures on the trams.

Cllr Lesley Hinds, Transport Convener on the City of Edinburgh Council, said: “As well as driver training and system testing, this vital pre-launch period gives us an opportunity to test out various scenarios in a controlled manner so that we are as prepared as possible before we embark on tram passenger services in May. This exercise on 13 March will help us to see how the system copes with crowd numbers getting on and off the trams at Murrayfield Stadium, which will obviously be invaluable preparation for future match days.”

Tom Norris, Director and General Manager of Edinburgh Trams, added: “All major public transport systems undergo thorough scenario testing before they go live and Edinburgh Trams has already carried out a wide range of these types of exercises. At Murrayfield Stadium on match or event days, we’re looking to ensure we have the best possible procedures in place to manage crowd numbers on to the system.”

Anyone who wishes to take part in the exercise is asked to send an email with the name(s) of those interested to Document.Control@edinburghtrams.com by Monday 10th March. Places will be issued on a first come, first served basis and any volunteers will need a copy of their confirmation email to gain access to the test. The exercise itself will take place at Murrayfield Stadium stop on Thursday 13th March. 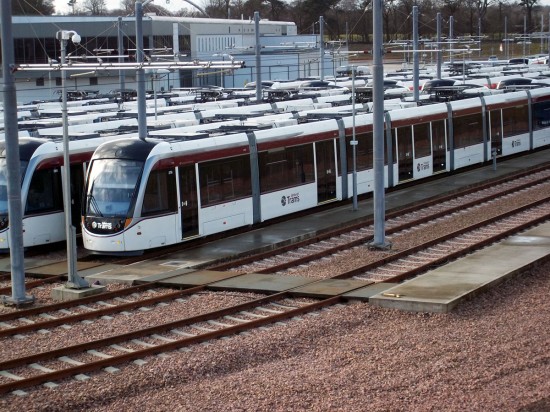 A look at Gogar Depot on 22nd February 2014 showing the CAF built trams at rest. Note that the newest livery is spreading amongst the fleet. 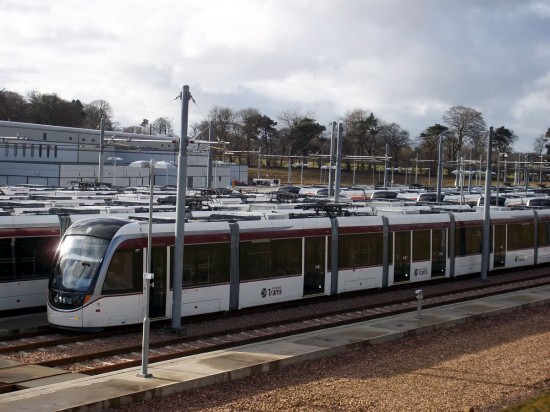 Another view of trams at Gogar. (Both photos: Alasdair McFarlane)

1 Response to Early chance to ride on Edinburgh Trams