Next up in our Lost Trams series is a tram which has been out of the public eye since 1999 but which does remain in the UK – Glasgow 585.

Glasgow 585 – a Glasgow Standard tramcar – entered service in May 1901 and was originally an open topper but was soon fitted with a short top cover (as sister car 22 operates with currently at Crich). It was then fully rebuilt in 1930 to a fully enclosed condition – and it is this style that the tram is in today.

Withdrawal came in October 1961 and the tram was restored to the 1930’s condition including a repaint into the blue route colour livery. Originally purchased by a private individual it was initially planned that 585 would make the trip to Leeds and the proposed tram scheme at the Middleton Railway but when it became apparent that this scheme was not likely to go anyway the plans changed. It was then presented to the Science Museum in London and it departed Scotland for the last time in November 1962.

585 was put on display at the Science Museum in Kensington and it remained there as a prominent exhibit for almost 40 years. But then with the millennium approaching a major revamp of the Science Museum saw the tram transferred away from the main site and it was transported to Wroughton in Wiltshire for storage. At this time it was still possible to see 585 as the large object store was open to the public on limited occasions but sadly with redevelopment work ongoing at the former Second World War airfield this is no longer possible and the tram is now out of public view.

Our photo shows 585 at the Wroughton store on 26th September 1999 surrounded by other transport objects which are no longer on public display at the main London site. 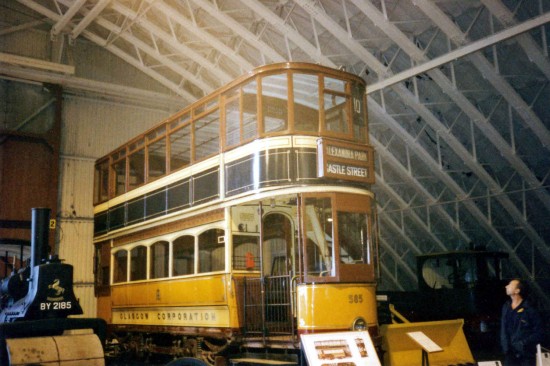