Posted on Sunday 9 February 2014 by Gareth Prior

The eight Alstom Citadis trams already delivered to Nottingham are continuing to undergo mileage accumulation and testing with this taking place overnight whilst the other service trams are tucked up in Wilkinson Street Depot. This included at the end of last year 216 and 218 running coupled to test the ability of the trams to tow and push each other in case of failure.

Although the majority of moves involving the tram do take place during the night there are occasionally shunt moves around the depot and one of these took place on 8th February when 220 was seen moving and our photo below shows the tram at Wilkinson Street Depot. The official line from Nottingham Express Transit remains that the first Citadis tram will enter passenger service from June although if possible this date will be brought forward.

With thanks to John Henderson for clarifying parts of the article. 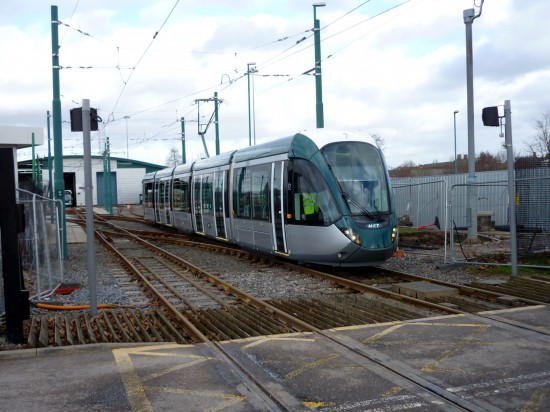