Now that we are in the depths of winter, the requirement for open top vehicles on the few heritage tramways that remain open for business is low, allowing some of these trams to receive some well-deserved attention. At Beamish Museum, Newcastle 114 is receiving some minor work ahead of the peak season ahead, whilst Seaton 12 from the Devon tramway’s fleet is being treated to a full repaint.

Starting with Seaton, and car 12 is currently in the latter stages of being repainted. This tram has undergone several radical transformations during its lifetime, and currently resembles an open-top version of a London ‘Feltham’ tramcar. Since 2010, the tram has carried a rather garish livery featuring multi-coloured vinyls commemorating the Seaton Tramway’s fortieth anniversary, but this outdated livery has thankfully now been consigned to the history books for good. In its place, 12 is set to receive a more tasteful mainly red livery, similar to that carried by the sole operational Feltham tram, Metroplitan 331 at Crich Tramway Village. Indeed, the Tramway Museum Society were consulted to ensure that the colour shades used are as accurate as possible, and this should result in a very smart looking tram being ready in time for the summer season.

Meanwhile in the North East, a number of the trams in the Beamish Museum fleet are receiving some cosmetic attention. With the application of new period style advertisements to Sunderland 16 and the fleet numbers to visiting Blackpool Railcoach 280/680 now completed, attention has been turned to Newcastle 114 which is being treated to a full exterior re-varnish. A scratch on one end dash panel has also been repaired, and the trolley mast will be overhauled before the car returns to service. Blackpool 31 is also expected to receive some fresh varnish to improve its appearance before its expected visit to Heaton Park in the spring, whilst Stockport 5 spends a few months operating at Beamish. With most of the active tram fleet at Beamish having been extensively overhauled and repainted in the last few years, it is now hoped to carry out remedial work such as this roughly every three years, to ensure that all of the trams keep looking their best. 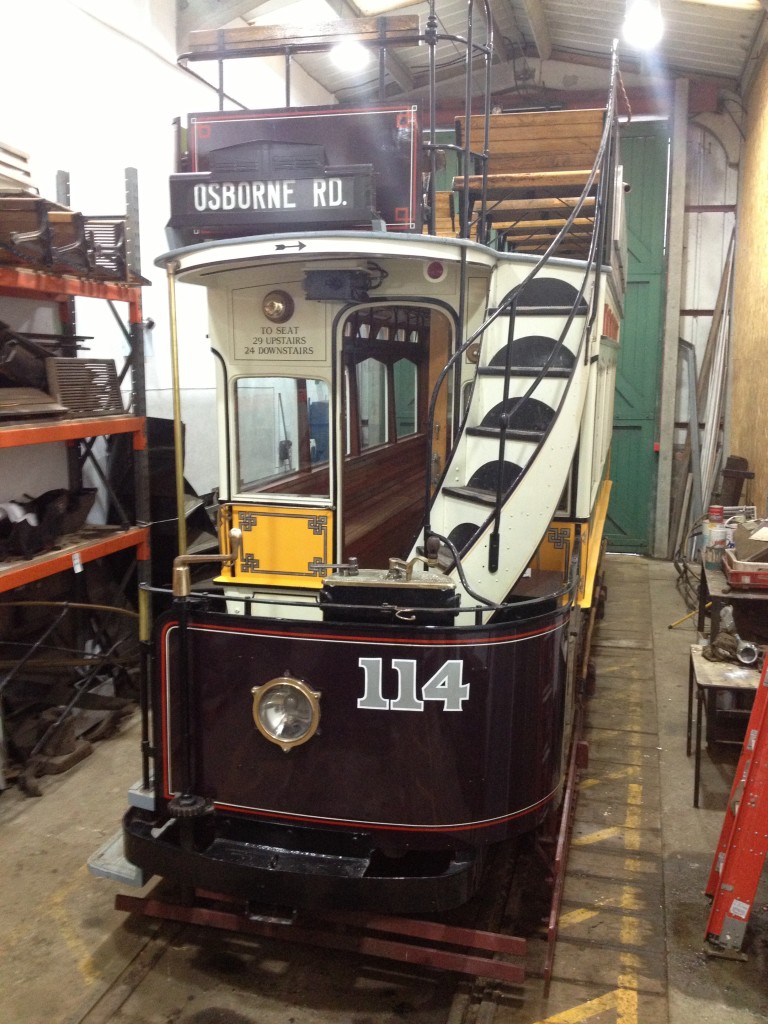 Newcastle 114 seen in the lean-to building within Beamish's tram and bus depot area, whilst under attention. (Photo courtesy of Beamish Transport & Industry Blog)