Our irregular series of “Lost Trams” returns with a look at another American export; Burton and Ashby 14 – a tram that is currently lost completely from the public eye. This tram headed across the Atlantic Ocean in 1980 for use on a new extension to a tramway in Detroit which has sadly since closed which has meant 14 is now stored out of public view.

Burton and Ashby 14 is an open top double deck tram built by Brush in 1906 and it remained in service on its home tramway until closure on 19th February 1927. Although a number of trams were sold off to Tynemouth and District, 14 did not make the trip and remained in the locality before being rescued with the unrestored body put on display outside a Model Railway Club in Church Gresley. It was there that it remained until the City of Detroit decided that they wanted to operate a double deck tram on their extension of the Washington Boulevard tramway. They approached John Woodman – now well known for his involvement in the Fleetwood Heritage Leisure Trust – who had been involved in the export of Blackpool Boat Car 603 to Philadelphia during the 1970s to see whether he could assist and two trams were considered for the role, rather bizarrely both numbered 14! As well as the Burton and Ashby car Lowestoft 14 was also considered but the final decision saw the former chosen.

With the decision made, and sponsorship secured in America, a start was made in the UK to restore the tram with the vehicle transferred to the workshops of a local engineering company. The restoration took place during 1979 and the early months of 1980 whilst over in America controllers and the truck were being overhauled – the Burton and Ashby line had been 3’6” gauge but the line in Detroit was 2’ 11 ½”.The tram started its long journey from the UK in May 1980 heading via Liverpool and New York to Pennsylvania where it would be united with the truck and controllers before arriving in its new home of Detroit at the start of July. It was soon put through its paces of testing and then entered service on the line where it was to enjoy several years of sterling service.

Declining passenger numbers on the heritage tramway in Detroit saw the decision made in 2003 to close the line and led to Burton and Ashby 14 – along with the Lisbon cars also in use on the line – being withdrawn and taken away from public view. A trawl of the internet suggests that 14 remains in Detroit and is now stored in a warehouse in the locality with no public access. It is not thought that there are any plans for its future and that it is destined to remain stored for the foreseeable future.

The photo below shows 14 in the summer of 2001 and was taken by Stephen Cobb during a visit to the United States on an Enthusiasts trip around Lake Erie organised by Travel Bureau Railtours. Although not part of the official itinerary a visit was made to Detroit and much to the delight of those present 14 was seen standing outside the depot and ready to run (it was thought that the line had already closed at this point). Rides were enjoyed by those visitors and a tour was also given of the car sheds to see the Lisbon cars. Just two years later the line was to be closed and 14 was to be stored away from the public eye.

* Does anyone know the exact status of 14 at the moment? If so please let us know through the usual channels! 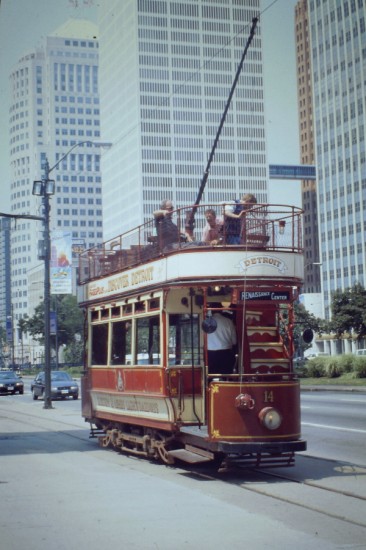