Despite not currently being open for business, 2014 has still got off to a busy start for volunteers at the Heaton Park Tramway, where work continues on the completion of the new Lakeside Depot. A fairly major shunting exercise on Sunday 5th January saw Leeds 6 finally gain covered accomodation after being exposed to the great outdoors for the last few years, with another of the tram fleet also entering the new building for the very first time.

At the start of the year, just two tramcars were housed inside the Lakeside Depot: Manchester 173 and Blackpool Vanguard 619. However, in order to maximise the available depot space it was all change on 5th January when 619 was extracted, allowing Leeds 6 to move inside for the first time. This tram had been loaned to Beamish Museum in spring 2010 and was initially exchanged for Oporto 196; however when both this tram and Blackpool 31 returned home a shortage of depot space meant that 6 had to live outside, and it remained there, seeing semi-regular use, until it finally returned to Manchester in April 2013. Once again, insufficient space in the tramway’s original depot meant that 6 was housed in a small storage compound outside, but happily its time in the wilderness is now over. It may be remembered that an overhaul on this car has already been started, and at some point during 2014 it should return to service painted in a gleaming coat of maroon and white, and restored to its previous identity as Hull 96.

Later that day, Blackpool Brush Railcoach 623 was also awoken from its winter slumbers and taken to Lakeside, where it was stabled at the top of the completed depot track 3, with 6 and 173 behind. This move has taken place to free up more room in the Middleton Road depot so that Manchester 765 can be lifted and its trucks rolled out for overhaul. This means that car 619 is now once again stored outdoors along with Blackpool works car 752, but with trackwork progressing well it should not be too long before both trams can also fit inside the new depot. 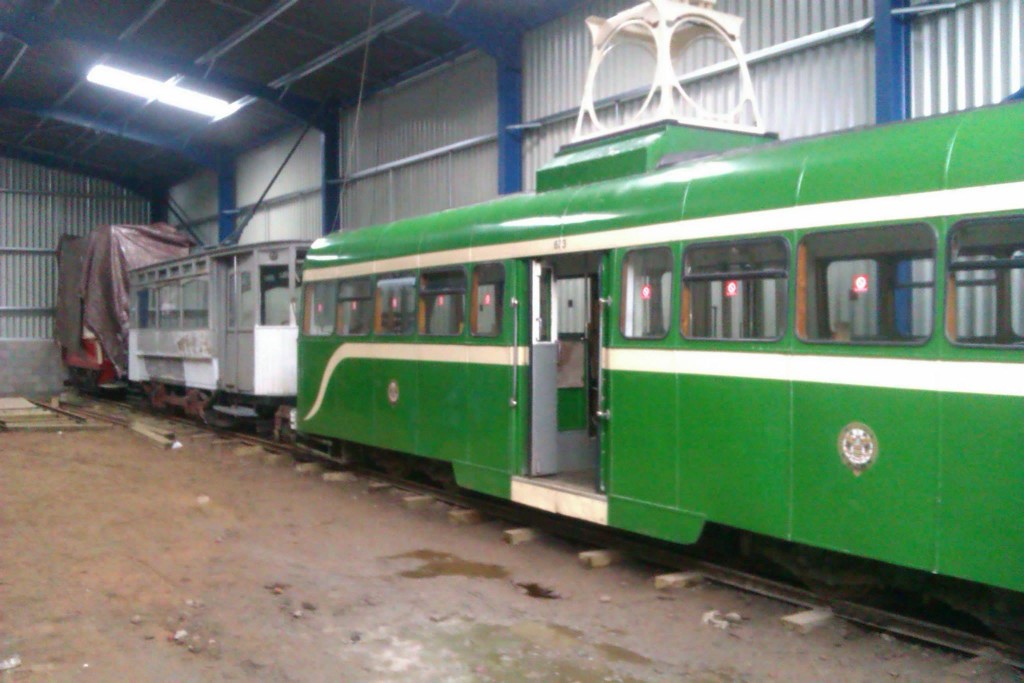 A general view of the inside of Heaton Park's new tram depot, with Blackpool 623, Leeds 6 and Manchester 173 now in residence and providing a very varied line-up. (Photo by Martin Bryan)