680 takes to the tracks at Beamish

Under normal circumstances, Monday 6th January should have been a pretty unremarkable day at Beamish Museum. The attraction was closed to the public, and the weather was wet, windy and wild. However, this was in fact quite an exciting day for those who were on site, as it witnessed the first test run of Blackpool Railcoach 680 in preservation.

680 – which will be known as 280, its original fleet number, for the duration of its stay in the North East – is currently on loan from the Manchester Transport Museum Society, before transferring to a more permanent home at Heaton Park. Over the Christmas period the tram has been undergoing various workshop attention to rectify a number of minor issues, no doubt the result of five years of storage at Blackpool. However, the main problem areas have now been addressed and therefore 280 was able to venture onto the main line at its new temporary home for the first time on January 6th. In miserable weather condition, the all-cream Ex-Towing car made a splendid sight on the tramway circuit, and certainly looked a lot better than when it last ran in Blackpool, painted in a dark blue livery.

As well as some work on its compressor and air braking equipment, 280 has received some minor livery alterations in the form of a thin green stripe both above and below its saloon windows. Unfortunately the positioning of the upper lining is not quite accurate, but still improves the appearance of the tram considerably. The full lining-out remains to be completed on one side and end of the car, and this should be one of the last few jobs to be completed prior to it being approved for passenger service. The tram has also had its trolley tower (which was delivered to the museum before the tram actually arrived on site) overhauled, and the trolley arm from the much-missed Blackpool ‘Boat’ car 233 has been fitted.

After a five year lay-off, the return to use of 280/680 will almost certainly be one of the tramway highlights of 2014 and hopefully the car will be well used and popular during its time spent at Beamish. 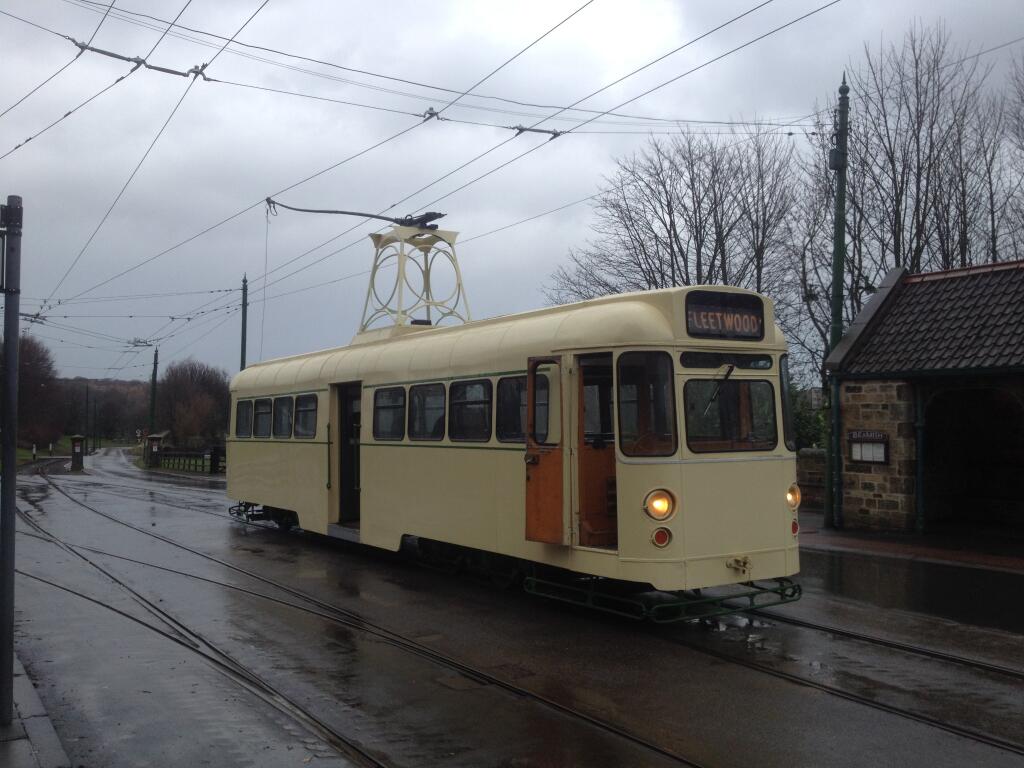 Blackpool 280 shows off its re-fitted trolley tower and the recent paintwork enhancements on its inaugural test run at Beamish, captured near the Foulbridge depot. (Photo courtesy of Beamish Museum)