Posted on Friday 11 October 2013 by Gareth Prior

The last of the “forgotten” three trams at the Seashore Trolley Museum in Maine, USA is the latest vehicle to feature as a “Lost Tram” – Glasgow Coronation 1274. Like the Leeds and Liverpool cars already featured in this series this tram is also stored in a derelict condition in the car sheds at the Museum waiting for its turn to be restored having been touched since arriving 50 years ago.

Built in 1940, 1274 was the first of that year’s batch of Coronation trams to enter service and was used in service up until the end in 1962. Upon withdrawal the tram was donated to the Seashore Trolley Museum directly by Glasgow Corporation Transport. The tram left the UK aboard the SS American Scientist and arrived at Seashore in September 1963.

1274 is another tram never to have operated at Seashore but has remained undercover in the large “car barns” there along with the Leeds Feltham and Liverpool Baby Grand already mentioned in this series. Its future remains secure in the USA although the chances of it being returned to operational condition are incredibly remote. 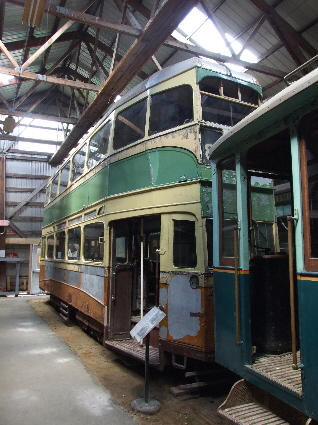 A view of 1274 at Seashore on 14th September 2013 in the cramped conditions of the big car barns at the Museum. (Photo: Stephen Cobb)