In Pictures: A look at the trams of the Ulster Transport Museum

Posted on Sunday 5 June 2022 by Gareth Prior

It has been almost 50 years since trams last ran in the Northern Irish city of Belfast (1954 to be precise was the last time they ran) but they may be gone but are not forgotten as several examples of the once numerous fleet are now preserved and on display at the Ulster Folk and Transport Museum in Cultra, 7 miles to the east of Belfast. As well as Belfast trams the museum is also home to a Hill of Howth tram and a vehicle from the Giants Causeway Tramway as well. In this pictorial article photos come from David Maxwell of a visit in May 2022.

The Ulster Folk and Transport Museum features two main sections – the Folk Museum looks of the way of life and traditions of the people of Northern Ireland whilst the Transport Museum looks at modes of transport past and present by land, sea and air. Obviously it’s the transport side of things which we are most interested with and as well as the trams which we’ll take a look at below there are also steam locomotives and other railway vehicles so there is plenty to see and do. 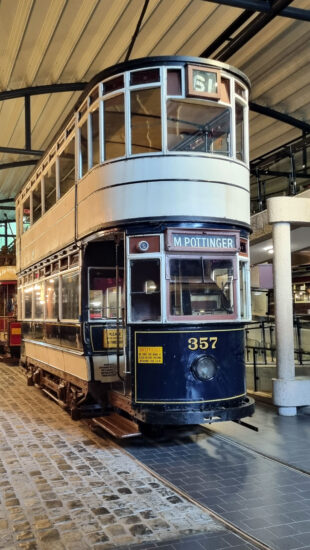 Belfast Corporation 357 is a Chamberlain tram built by Brush in 1930. A total of 50 trams were part of this order and they were named Chamberlains after William Chamberlain who was General Manager of the Corporation’s tram system from 1928-1930. They were some of the first trams to receive the new Corporation livery of Blue and Cream (only introduced in 1929). 354 would remain in service until the very end of Belfast’s tramways and was in fact the very last tram to run on the network when four months after the system closed it moved from Ardoyne Depot to Mountpottinger Depot for preservation and restoration. It was presented to Belfast Transport Museum in 1955. 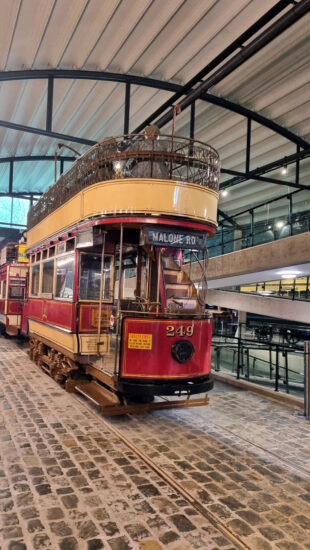 Showcasing the earlier Red and Cream livery is City Tramways no. 249 built in 1905 from a previous horse drawn tram. As a horse tram it can trace its history back to the 1890s and in total around 50 of these trams were converted for electric operation. Whilst many of these subsequently received top covers, 249 was one of seven not to go through the works for this purpose. It remained in service until 1948 (and was the last tram in this livery) before it was converted into a snow plough and was used until the closure of the system. Restored back to its passenger condition, like 357 it was donated to the Belfast Transport Museum in 1955. 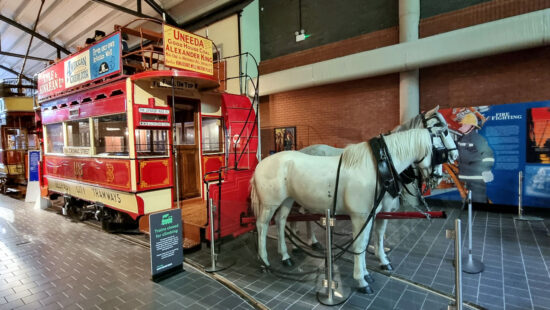 Going further back in time and this photo shows Belfast Street Tramway 118 – a horse tram built in c1897. As with 249, 118 was converted to electric operation but following withdrawal was sold off for further use. Its thought this tram went off to be a summer house in County Monaghan but it was soon rescued and after being placed on a chassis from a works vehicle in Sandy Row Depot was presented to Belfast Transport Museum in 1963. Its now displayed in 1905 Red and Cream livery and has the ubiquitous fake horse to show that it was a horse tram! 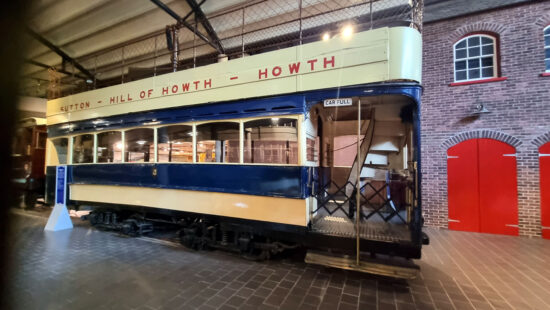 As we mentioned in the introduction its not just Belfast trams at the museum with other exhibits including Hill of Howth 4. Built in 1904 by Brush this tram was one of the original batch of eight constructed for the line (the familiar no. 10 at Crich came along a little bit later). The line closed in 1959 at which time it was the last tram line in the world to be worked exclusively by open-top double-deck tramcars. We’re more used to the teak livery that 10 is in at Crich but 4 is in the 1950s Blue and Cream Great Northern Railway livery. 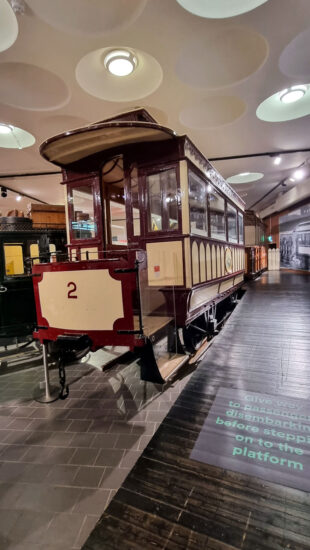 The Giants Causeway Tramway ran between 1883 and 1949 and was the very first hydro-electric tram in the world. After closure of the line the vehicles were auctioned off with two surviving into preservation at what is now the Ulster Transport Museum. In this photo we see no. 2. 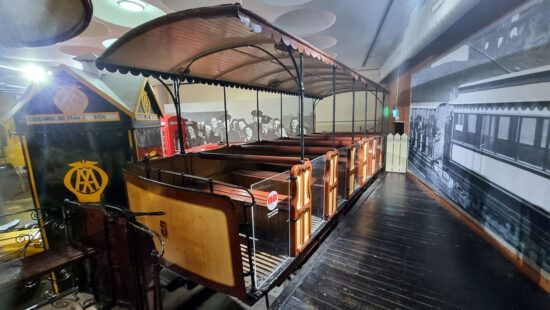 Also at the museum is Giants Causeway Tramway no. 5 which is located just behind no. 2. (All Photographs by David Maxwell, 21st May 2022)

This entry was posted in Ulster Transport Museum. Bookmark the permalink.

1 Response to In Pictures: A look at the trams of the Ulster Transport Museum