In Pictures: The next tram is for Broadway

Posted on Tuesday 3 May 2022 by Gareth Prior

For a large period of April there have been no Manchester Metrolink service running to Eccles with rail replacement works taking place. Works started on Monday 4th April and initially saw all trams from Ashton-under-Lyne terminating at MediaCityUK with buses operating for the remainder of the route to Eccles, although from Wednesday 27th April trams could run to Broadway but with the spur to MediaCityUK closed. The line reopened in full on Saturday 30th April although this was delayed slightly after a lorry dumped its load on the tracks in Eccles.

This is the latest set of trackworks on the Metrolink network with the Eccles line having already seen a closure earlier in 2022 (during the February Half Term school holiday) and the promise of more to come later in the year. The Eccles line is now over 20 years old and the infrastructure has reached the stage where major replacement is needed to allow a reliable service to be maintained. Its hoped that the short closure of the MediaCityUK spur will enable the points to be fixed which has left only one platform available and trams only able to service it in one direction.

The destination of Broadway on the front of trams for the two days at the end of the closure was a throw back to when the Eccles line first opened and was the first time since trams on this line ran to Ashton that it has been a regular scheduled destination. Thus giving the opportunity to capture trams at the Ashton end of the line with the unusual destination. 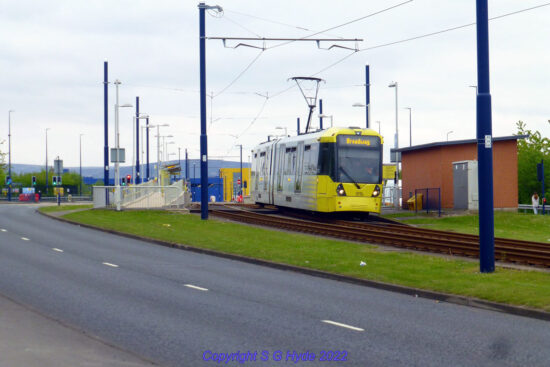 3111 has just left Ashton Moss as it heads to Manchester City Centre and then Broadway. IKEA dominates the background as always. 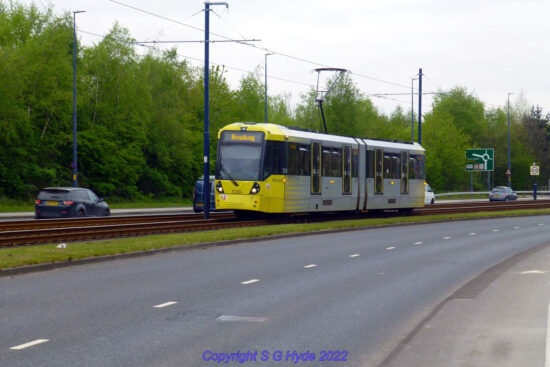 3120 shows its Broadway destination as it run down the middle of Lord Sheldon Way. 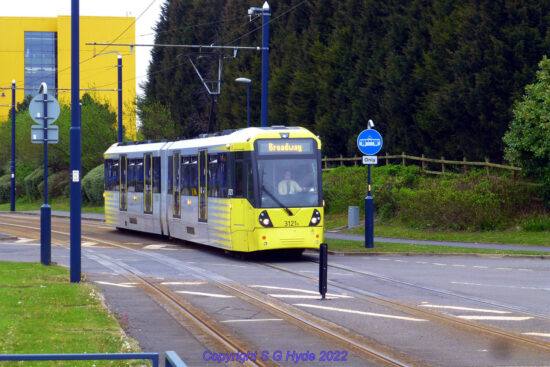 Again on Lord Sheldon Way this time we see 3121 heading off to the bright lights of Broadway. 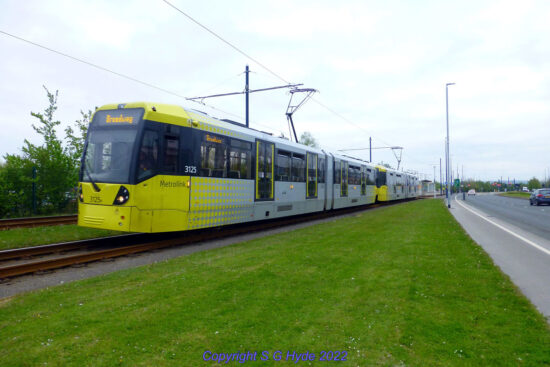 3125 is coupled with 3079 – a number of double trams ran during the closure to Eccles – as its seen close to Ashton Moss. (All Photographs by Steve Hyde)