Posted on Tuesday 3 May 2022 by Gareth Prior

On Saturday 30th April with Sheffield Wednesday having a crucial match in their bid for promotion from League One it was back to the old days on Stagecoach Supertram – with the return of football specials! It may not quite be as it once was but in order to move as many fans to and from the game Supertram ran some specials on the Yellow route between Middlewood and the city centre.

With the current timetable on the Yellow route seeing trams every 12 minutes throughout most of the day – and with a bumper crowd expected at Hillsborough for the match against Portsmouth – Supertram allocated additional trams onto the route with 115 seen running just with “Special” as its destination (not giving much clue where it was running to from the outside!). There were also additional Supertram staff on hand at Leppings Lane stop to marshal the crowds onto the trams as they arrived.

As for the match itself Wednesday won 4-1 and booked their place into the League One playoffs where they will play Sunderland for a place in the final. The second match will gain be at Hillsborough on Monday 9th May. 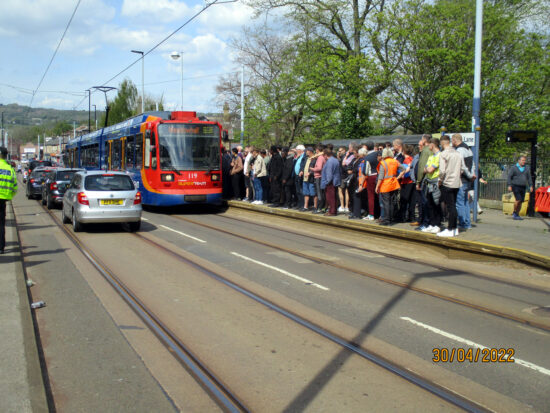 119 pulls into Leppings Lane with a service to Meadowhall. Judging by the crowds on the platform its going to a bit squeeze on board! 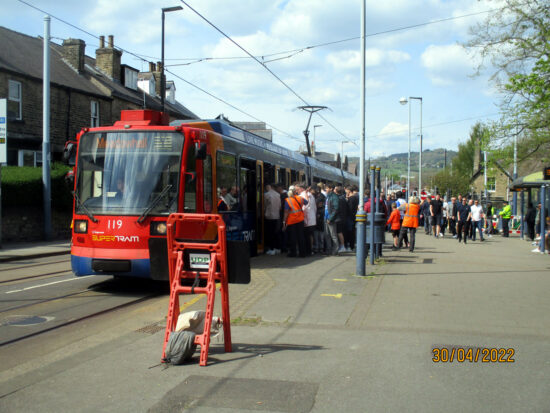 With the tram standing at the platform the crowds pile on. 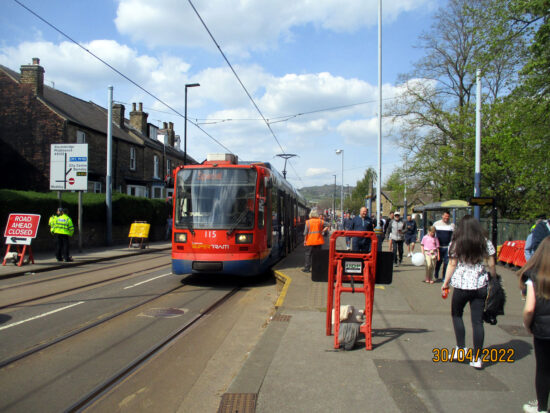 115 running as a Special waits at Leppings Lane. (All Photographs by Stuart Cooke, 30th April 2022)