In Pictures: Southampton 57 to be moved

Posted on Thursday 23 December 2021 by Gareth Prior

Southampton 57 – the “other” Southampton tram – is about to go on the move with the tram expected to leave its long-term storage home of the Hampshire Cultural Services at Chilcomb near Winchester to further storage in Romsey. This was the tram which started off tram preservation in the city but as time has gone on it has been superseded by work on fellow discoveries Southampton cars 11 and 38.

Ignoring the Tramway Museum Society’s Southampton 45 (which is national tram preservation and not preservation in Southampton), no. 57 was the first of the other Southampton trams to be discovered with the body being found close to Romsey in Hampshire in the mid-1970s. This led to the setting up of the Southampton Tram 57 Project to restore the tram back to its former glory. Built in 1910 the tram is similar to 38 and 45 but had a slightly larger capacity (54 compared to 48) and was of a slightly different canopy design. It had knifeboard seating on the top deck and the canopies were then rebuilt in 1922 increasing the capacity further.

Subsequent to the discovery of 57, two further Southampton trams were discovered both of which were considered in better condition and more likely to be able to fully restored and so 57 was put on the back burner with ownership being retained by Hampshire Cultural Services with storage latterly at Chilcomb near Winchester whist attentions were concentrated on working on 11 and 38 along with the arrival of Lisbon 715 which had initially been acquired for spare parts. These three trams were all moved to the Solent Sky Museum in Southampton from the Docks in 2020 giving a better environment on which to work on the restoration of the trams with excellent progress being made on car 11 in particular.

This all left 57 – the tram which the group were originally named after, although in more recent years they changed their name to the Southampton Tram Group – languishing in undercover storage with no obvious plan in place for its future. But with Hampshire Cultural Services wishing to dispose of the tram its ownership has now also been transferred to the Solent Sky Museum and although it won’t be making its way to the main museum site at the moment it is being moved to off-site storage in Romsey (bringing it back to where it was discovered nearly 50 years ago!) securing its future.

There are no concrete plans for what may happen to the tram as it was always considered to be in a much worse condition than 11 and 38 with suggestions at one time being that it would be displayed in “as found” condition.  The railings and stairs from the tram have already been moved with the rest of the tram body following in due course. 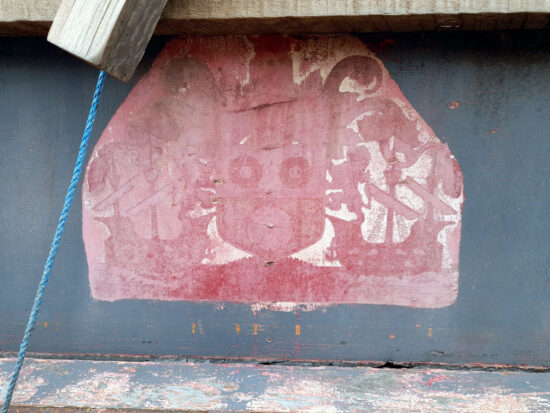 The Southampton Corporation Tramways crest on 57. 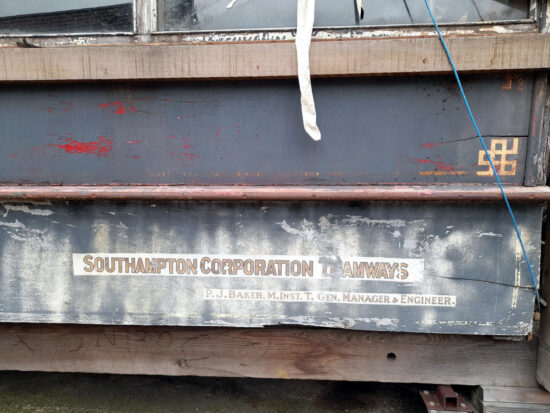 Remnants of the livery on the bodyside of 57. 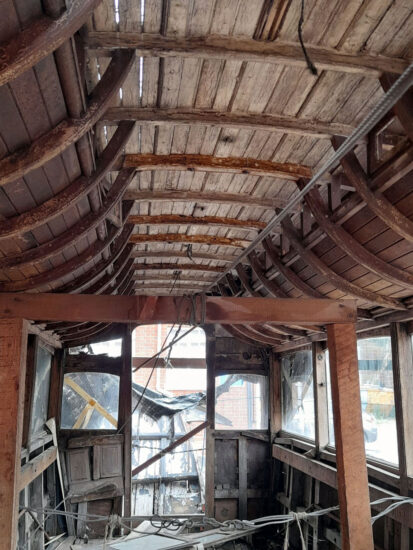 Inside the lower saloon of 57. (All Photographs courtesy of Southampton Tram Project)