Posted on Monday 22 November 2021 by Gareth Prior

“Trams &” is heading overseas today as we head to Amsterdam for an archive view of a tram and a coach.

The below photo was taken on 18th March 1996 at Onderuit stop on Beneluxbahn and shows tram no. 904 working a route 5 service from Amsteveen to Centraal Station. The tram is one of a batch built by BN in 1989-1990. At this time the section of track seen here was also used by Metro trains on route 51 to Westwijk which meant that the stops had two levels of platform. The shared nature of this track ended during 2019.

On the opposite side of the road we see a coach being operated by Bovo Tours with the reg no. of VJ 76 FM. 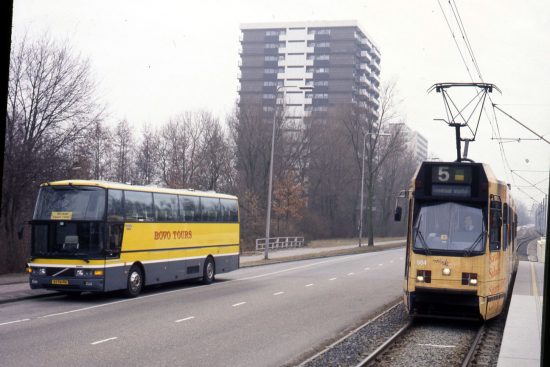