Replacement bus to run in lieu of Llandudno & Colwyn Bay 7 at 2021 Christmas Parade!

Over the past 18 months we have seen many things delayed as a result of the Covid pandemic and that has not only included some of the larger heritage tram organisations we often feature on these pages but also some of the smaller groups – such as the Llandudno & Colwyn Bay Tramway Society. Having lost significant time and fundraising opportunities replica tram no. 7 will not be able to attend one of its higher profile events at the Llandudno Christmas Parade this year (with the event having been cancelled in 2020 this will be the first time it has happened since 2019) but to still give the Society some publicity on the day they have arranged for a replacement bus to feature instead!

Replica tram no. 7 is currently undergoing some major repairs which have unfortunately been delayed due to Covid restrictions in Wales which means it is unable to attend the Llandudno Christmas Parade, which takes place on Saturday 4th December 2021. The tram has attended every single Parade since its first appearance in 2007 and so to still allow the Society to take place they will be sending a replacement bus in its place!

This will be a former old local Crosville bus (which was ironically in competition with the tramway in the final years of its operation!). Its not being revealed which bus it will be with the best way to find out being to head to Llandudno on 4th December and view the Parade which will kick off at 1600.

Missing the Parade is another challenge for the Llandudno & Colwyn Bay Tramway Society who have suffered in the past couple of years without the usual public fundraising events but still needing to spend on costs such as renting suitable accommodation to protect the tram for now and the future.

The Society are constantly fundraising to cover their costs and any amount – however big or small – is welcomed to help them achieve their aims of securing the tram for future generations. You can find out more details on how to donate by visiting http://swissitalianpaddlesteamers.com/lcbtramsoc/treasurer.html. You can also become a member of the Society for just £10 a year which includes regular newsletters as well as knowing you have helped to save a bit of history. 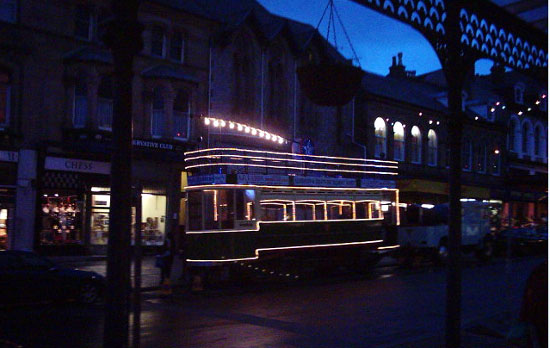 The first time that Replica Tram no. 7 appeared at the Llandudno Christmas Parade in 2007 is pictured here. Sadly it will miss the 2021 event as its undergoing major repairs but hopefully with continued support from the public it will be able to return again in the future. (Photograph courtesy of Llandudno & Colwyn Bay Tramway Society)