Posted on Wednesday 17 November 2021 by Gareth Prior

Most of our articles featuring Southend-on-Sea on the Essex coast usually look at the Pier Tramway/Railway (which is seeing new trains introduced within the next few months) but the town used to be home to a 3ft6in gauge tramway from 1901 until 1942 and continued roadworks in the town centre have seen further track discovered and removed.

We have previously seen some track found and removed during town centre improvement works and that work has been continuing throughout the past few months and during that even more old tram track has been discovered. As previously the rails have been removed and cut into smaller sections and show the effects of having been buried almost 80 years ago with the grooves now full of mud from their time away from the public eye.

These rails have been found in London Road in Southend-on-Sea Town Centre which was once on the main thoroughfare of the tramway. In total the trams ran for 9.11 miles on the 3ft 6in gauge system with the service inaugurated on 19th July 1901 and the last trams running on 8th April 1942. The routes went as far north as Leigh-on-Sea and south as Thorpe Bay. The maximum length of the network was reached in 1914 and trolleybuses started to be introduced from 1928 which was the beginning of the end for trams in Southend. 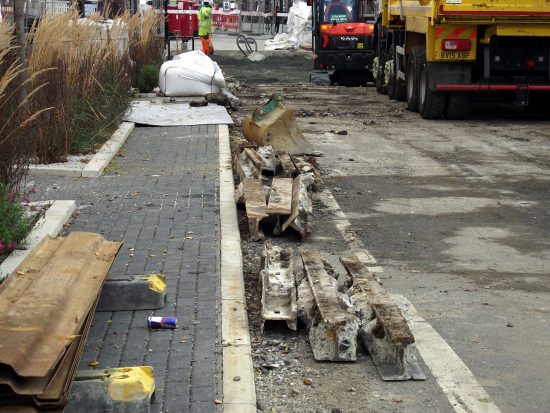 A close-up of the removed sections of track with mud and other debris filling the grooves. (Photograph by Ian Banks, 16th November 2021)

1 Response to In Pictures: More tram track uncovered in Southend