In Pictures: A busy day on Edinburgh Trams

Posted on Tuesday 16 November 2021 by Gareth Prior

When there is an event at Murrayfield Stadium – whether that be a rugby international or a concert – Edinburgh Trams really comes into its own and plays an even more vital role than it does usually as it transports crowds with a more intensive timetable in operation. One such occasion was on Saturday 13th November when 17 of the 27 strong fleet of CAF trams were noted in service.

To aid passengers there were ticket sellers and tram marshalls at all city centre stops and the General Manager was even seen at Haymarket where there was a mobile ticket office on the Murrayfield bound platform. The trams were packed on the way to the stadium as were Lothian Buses services and the part route extras they were also operating.

To give an example of how busy it was and how many trams were out and about at around 1120 whilst 257 was loading a large crowd at York Place there were a further three trams bumper to bumper at the other end of York Place (between Elder Street and the bend onto North Saint Andrew Street) with the last one briefly blocking westbound traffic from York Place onto Queen Street. 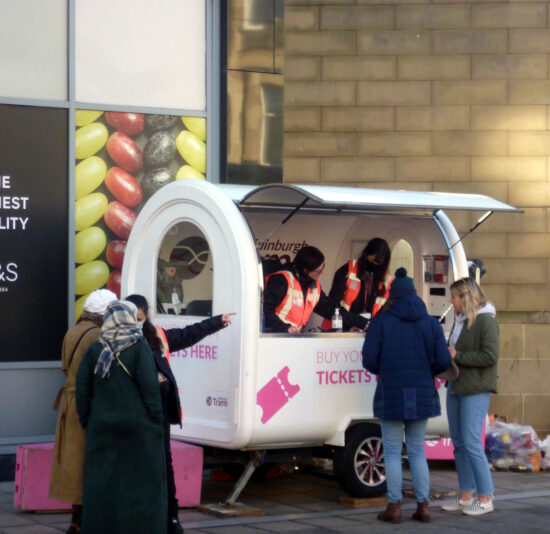 The mobile ticket office standing at Haymarket to allow passengers to easily purchase their tickets. 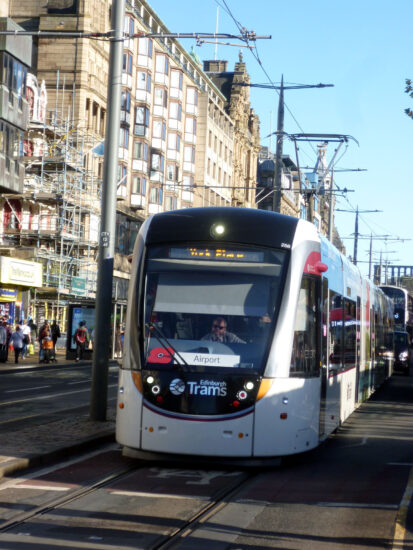 258 is seen here on Princes Street with a service for the Airport. The board at the bottom of the cab shows the correct destination whereas the electronic display is incorrect. The tram has a Poppy in the cab for the Remembrance celebrations. The tram is being held at the lights for the Mound/Hanover Street junction between St Andrew Square and Princes Street stops. 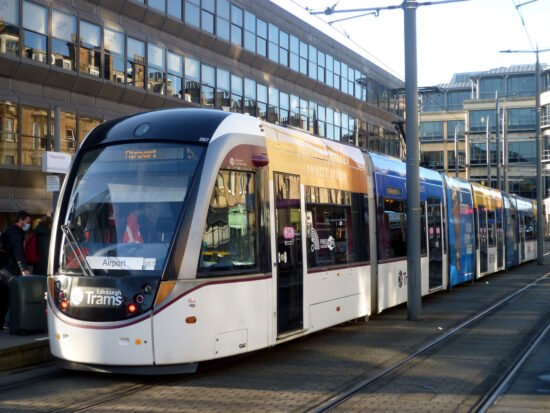 Latecomers for Murrayfield are being picked up at Haymarket ten minutes before kick off of the match by 267 which is in an advert for Johnnie Walker Princes Street. Developers want to demolish Rosebery House on the left to build something bigger. 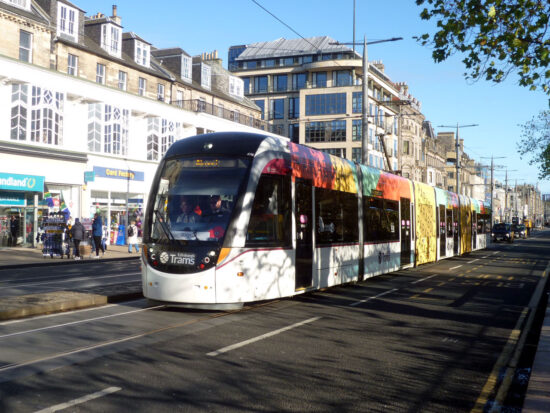 276 heads towards Murrayfield and the Airport on Princes Street between the stop of that name and West End. The tall modern building is on the corner of Castle Street and replaced the Palace Hotel which was destroyed by fire in June 1991. Just visible in front of Poundland is someone selling South African flags for those travelling to the rugby international. 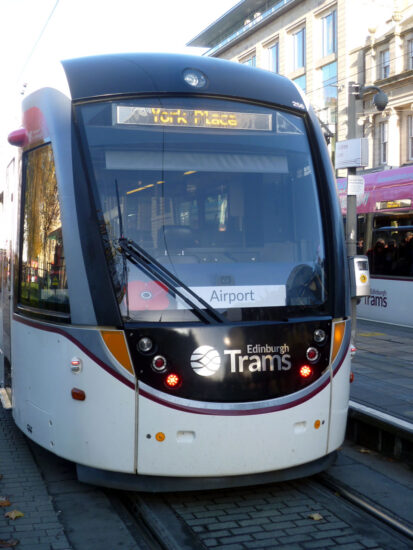 The rear of 256 is seen at St Andrew Square citybound, despite the board saying Airport. The tram on the right is 255 heading to the Airport. (All Photographs by Roy Calderwood, 13th November 2021)