In recent weeks we’ve been wondering when trams may return from Bull Street to Library and when we may see the extensions to Edgbaston Village and Wolverhampton Railway Station open, but the question to ask about the West Midlands Metro now is when will any trams run again? It was announced on Friday 12th November that there would no trams running at all on the complete line from Saturday 13th November – until further notice. Once again it would seem to be an issue with the cracks which were discovered earlier in the year with additional repairs now required.

The full statement on the West Midlands Metro website says:

We are sorry that there will be no Metro services from Saturday 13 November until further notice.

Earlier this year a repair programme was implemented to address cracks identified on several of our trams. As part of this work, it has become necessary for additional repairs to be carried out.

To ensure that we can continue to run a safe and reliable service, a decision has been made to remove all 21 trams from service until further notice.

This decision has not been taken lightly and we sincerely apologise for any inconvenience that may be caused.

Please be assured that every option has been fully considered to avoid suspending the service. As always, the safety of our customers and colleagues is our priority and this will never be compromised.

Your patience and understanding is very much appreciated while we work hard to resume services.

In recent days it had become apparent that there was an issue as a reduced service was operating with several tram failures seen. This reached its peak on the morning of Friday 12th November when only five trams were available to operate a limited service between Wolverhampton St George’s and Bull Street with busy trams seen across the network. It wasn’t until midday that updates were made regarding the reduced service but at that point there was no confirmation as to the reason why or even that it was being considered to close the complete line for a period. That announcement came during the afternoon and was met with shock – including from some drivers who were reported as saying the announcement was the first they knew of it.

As you will recall back in June, the complete fleet of trams was withdrawn for several days after the discovery of cracks on some of the CAF built Urbos3 vehicles. A repair programme was put in place at this time and it was just presumed that as the trams were returned to service and there were no major service changes in the five months since then that all repairs were completed and it was full steam ahead for the trams. But now it appears from the latest statements that these were only temporary repairs and recent inspections have shown that additional repairs are now needed – hence no trams for at least four weeks.

In a statement a spokesperson said: “Temporary repairs were carried out to return our fleet to service as soon as possible but inspections have found that more extensive and permanent repairs are now required. To ensure the future safety of our customers and colleagues, we have made the decision to suspend all services from 13 November 2021 to carry out these repairs. We are continuing to work alongside the tram manufacturer to understand the issues and carry out the repairs as quickly as possible. At this time we are unable to confirm when services will resume but we expect it will take at least four weeks.”

During this lengthy closure, the oh so familiar ticket acceptances on alternative public transport is again in place:

In response to this news Andy Street, Mayor of the West Midlands, said: “This is incredibly disappointing and frustrating for customers – but safety must come first. It is now critical that Midland Metro Ltd get the repairs done and restore a safe service ASAP. I am seeking urgent answers from them and the manufacturer as to what has gone so wrong.”

There are now so many questions which will be raised about why the same problem had come about just give months later and whether the initial repairs were expected to hold for longer. You also have to wonder whether a quicker commissioning programme on the new trams should have been introduced (so at least some form of service could have run) – as presumably they are not effected by the cracks on the original Urbos3 trams.

But the headline from all this is that anyone who relies on the West Midlands Metro will not be able to for at least four weeks. The next four weeks are often some of the busiest on public transport in the lead up to Christmas as people get out to do their shopping ahead of the big day. The opening of the extensions at either end before the end of 2021 as originally planned must now also be in serious doubt. Safety, of course, comes first but even when repairs are made what damage will there to be to the network’s reputation? 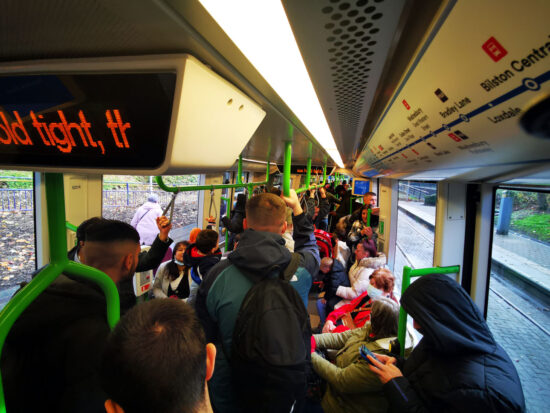 With only five trams out in service on 12th November scenes like this were not uncommon. (Photograph by Andy Walters)