Posted on Wednesday 3 November 2021 by Gareth Prior

With work on the Trams to Newhaven project continuing we take a trip to Ocean Terminal where we see recent progress on the construction work around the eventual tramstop, which will be the penultimate stop on the extension just followed by the new terminus at Newhaven. Roy Calderwood with the photo.

The Ocean Terminal area is currently not only seeing construction works in connection with the Trams to Newhaven project but there is also the Cala Homes “Waterfront Plaza” development which is seeing excellent progress as well. But its not all good news development wise here as the Ocean Terminal shopping centre has, like other shopping centres across the country, seen a number of shops close meaning there are plenty of empty units and as a result there is a current consultation on demolishing the former Debenhams store and one car park to open up the waterside where a distillery (to a vertical design) is also under construction next to the former Royal Yacht Britannia.

As with most tramstops on the route the stop at Ocean Terminal will be an island platform and as well as the tracklaying that is now in the early stages of construction. 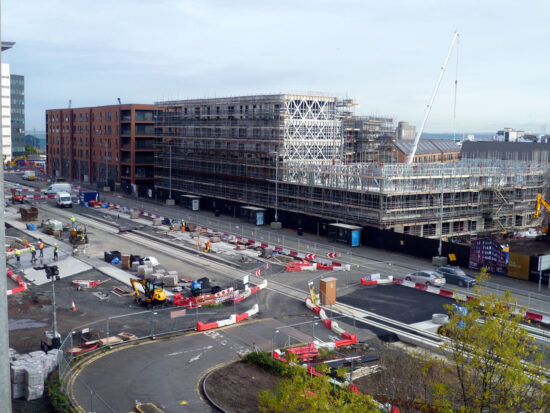 This photo was taken from the Ocean Terminal multi-storey car park and looks approximately northeast. The shopping centre is out of view to the left. You can see the nearest edge of the island platform in the middle of the picture – this will be the side used by trams to the city and airport. The Cala Homes “Waterfront Plaza” development continues to take shape beyond the tram tracks. City bound trams will turn to the right just beyond the reddish block. The bus stops that can be seen on the far side of the road (together with those on the near side of Ocean Drive where public realm is being restored) have now been out of use since March 2020, bus passengers currently having to use stops without shelter some 200/300 yards away to the right. (Photograph by Roy Calderwood, 2nd November 2021)