Its time to go out and about for another “Lockdown Walk”, this time round we are back in Edinburgh City Centre.

This image is taken just on the corner of Princes Street and South Saint Andrew Street where the tramway curves round on its way from the stop at St Andrew Square onto Princes Street as it continues on its way to the Airport. The building in the background here was built in 1906/7 as the R W Forsyth department store which closed in 1981. It was bought by the Burton group (later Arcadia) and in recent years the upper floors were converted to a Travelodge. The Topshop/Topman store on the lower floors has now closed following Arcadia’s demise and this now waits a new use. 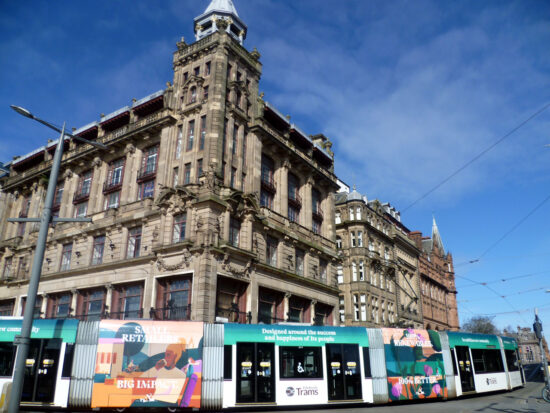 This photo depicts 271 as it turns from South Saint Andrew Street (on the right) to Princes Street (on the left). (Photograph by Roy Calderwood, 12th April 2021)