In Pictures: The latest from Leith Walk

As work continues on the construction of the Trams to Newhaven project in Edinburgh we take another look at recent progress on Leith Walk. This time we are at the Edinburgh end of the road where we see some more track being laid as the work seems to be continuing at a rapid pace. Roy Calderwood is our photographer.

The below view is taken looking south west towards the city centre and was captured from a temporary crossing through the worksite at the Montgomery Street/Annandale Street junction. This section of Leith Walk – and all parts in the areas which were not formerly in Leith before that became part of the City of Edinburgh – does not actually have Leith Walk addresses. There are several different names on each side along the street. Thus on the left behind the trees (which will be removed as the landscaping is due to be changed before the trams start running) is Elm Row while the tenements on the near right are Gayfield Place. 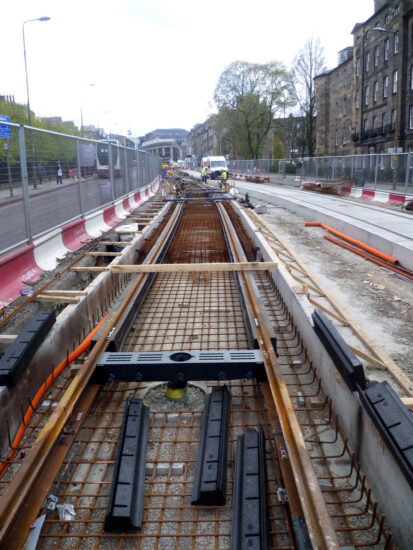 Here we see the city and airport bound track on the left and the Newhaven bound track on the right. Just on the left beyond the bus is the junction with London Road; the former roundabout here was largely removed before the first tram project and will be a fully signalised junction by 2023. If you look in the distance along the citybound track the modern sandstone curved building is John Lewis & Partners (open in 1973 and extended in 1988) with the new St James Quarter behind. The new Picardy Place stop will be located just round a right bend before the John Lewis store. Some of the last original Edinburgh trams would have traversed this area on their way back to Shrubhill Depot at the end of service on 16th November 1956. (Photograph by Roy Calderwood, 29th April 2021)