In Pictures: Works continue on Trams to Newhaven project

Posted on Thursday 4 March 2021 by Gareth Prior

The Edinburgh Trams extension from York Place down Leith Walk and then onto Newhaven via Ocean Terminal is due to start public services during 2023 and with construction works having got underway last year excellent progress continues to be made at various sites along the route. In this latest update we go to the very end of the line at Newhaven and Ocean Terminal to take a look at what construction work has been ongoing there with Roy Calderwood providing the image.

The last intermediate stop on the line before it reaches Newhaven will be located at the 2001 built shopping centre of Ocean Terminal. The centre lost one of its anchor stores in BHS a few years ago and during the pandemic has seen Debenhams become another high profile closure. But when the line does open to trams it is still likely to provide a fair amount of traffic with the Royal Yacht Britannia also located here and a new Port of Leith Distillery (to a vertical design) is planned for a location at the far end of the shopping centre. 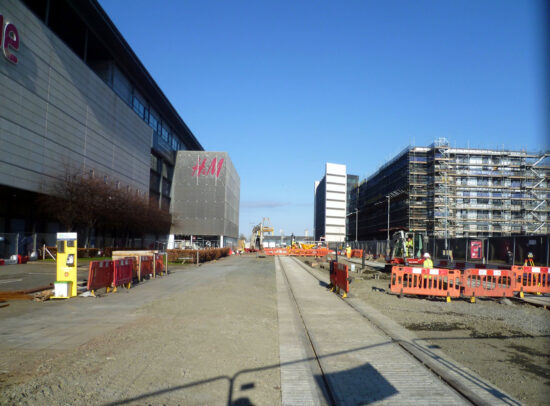 This image is the northeast view with the city and Airport bound track on the left and the Newhaven bound track less obvious on the right. The shopping centre is to the left with the Ocean Point office block in the distance (one of whose occupants is Visit Scotland). Trams to the Airport will turn right at a signalised junction and continue along Ocean Drive, passing between the new flats and Ocean Point as they do. An island platform will be provided here.

As trams leave the stop at Ocean Terminal (the last stop before they reach the terminus at Newhaven) they will run along Ocean Drive before heading to Lindsay Road. But with the two roads being at different heights a ramp is having to be built to connect the two and work on this has now started to get underway as seen in the photo below. 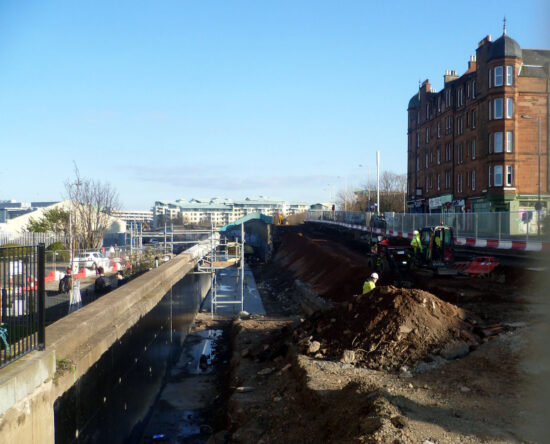 This has been taken outside 131 Lindsay Road, which is in effect the eastern end of the future Newhaven terminus tramstop where trams from the city centre and beyond will be terminating. It is looking eastbound and the previously mentioned ramp will be constructed between the two retaining walls to enable trams to travel between Lindsay Road and Ocean Drive. To the right of the photo is the junction of Lindsay Road and Hawthornvale (by the green painted Haven Café). Until the Western Breakwater was built in the late 1930s and land for industry started to be reclaimed, the Firth of Forth reached right up to Lindsay Road. The actual Newhaven tramstop will be behind the photographer and is due to feature two side platforms with a stabling area for trams provided beyond the stop. (Both Photographs by Roy Calderwood, 1st March 2021)

* The Trams to Newhaven project have posted a progress route map which gives an update of where work has taken place so far – it can be downloaded at https://www.edinburgh.gov.uk/tramstonewhaven/downloads/file/406/progress-route-map-january-2021-pdf-.