Posted on Wednesday 3 March 2021 by Gareth Prior

As we continue this series where we take a look at surviving structures and artefacts from the UK’s first generation tramways we are in the East Midlands where we look up again and find another rosette.

As we have seen in this series previously if you take a look up when working around many UK towns and cities you will find some rosettes where the overhead wires of tramways – and possibly trolleybus routes too – were attached when it wasn’t possible or desirable for overhead poles to be erected in the street. This latest example can be found in Victoria Street, Derby.

Trams first started running in Derby in 1880 with Derby Corporation Tramways taking over on 1st November 1899. Initially operated by horses it was electrified from July 1904 and the line along Victoria Street saw its first electric trams on 4th September of the same year. The system closed on 2nd July 1934 with the route along Victoria Street one of the last to succumb. 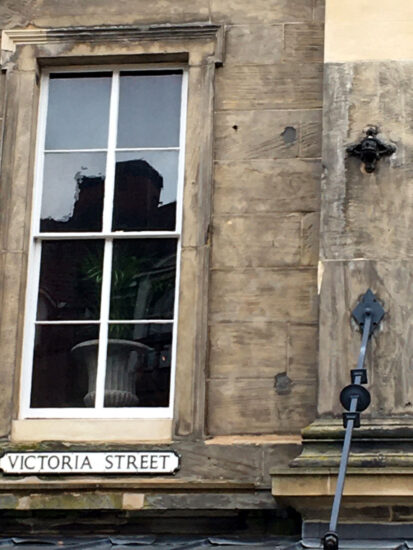 The rosette on Victoria Street is seen here towards the top of the image on the right hand side of the image. (Photograph by Frank Bagshaw)