In Pictures: Update from Leith Walk

Posted on Sunday 21 February 2021 by Gareth Prior

The major construction project to extend Edinburgh Trams from the current city centre terminus at York Place along Leith Walk and then on to Newhaven has been continuing in recent weeks. As with most projects of this type much work goes on where to the layman it would appear holes are just being dug with very little outcome but in some of the worksites now it is the opposite with track continuing to be laid. This latest update shows the scene on Leith Walk during February 2021.

With a “one shovel” project the majority of construction works take place in one go rather than the same section of road being closed, opened and then closed again, which not only makes a more efficient use of resources but should also hopefully mean the amount of disruption – although still significant – is kept to a minimum. The fewer headlines about the significant disruption the building work is causing the better!

In this below image we are looking north east from the Annandale Street junction (on the left) on Leith Walk (Annandale Street is the location of the Head Office and Central Garage of Lothian Buses). On the left we see the converted office block which is now the Edinburgh Central Youth Hostel. The Royal Botanic Garden in Edinburgh – the second oldest in the UK after the one in Oxford – was once located behind where the tenements on the left were later built.  Known then as the Physick Garden it was on a five acre site there from 1763 until its move to the present Inverleith site in the early 1820s. 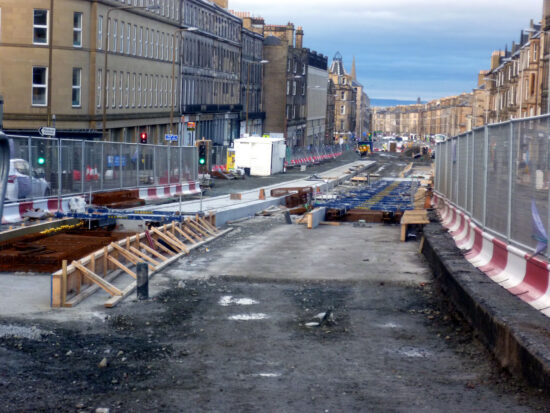 Here the Newhaven bound track has now been set in concrete with the citybound track not so well advanced at this stage. The tramstop at McDonald Road will be just before the turreted building in the middle distance. It may be incredible to think but in the early 1950s there were 13 tram services using the southern section of Leith Road! (Photograph by Roy Calderwood, 19th February 2021)