In Pictures: More snow in Sheffield

Stagecoach Supertram services saw delays, temporary suspensions and general disruption on Thursday 14th January after heavy snow fell in South Yorkshire. As with the previous snow at the end of 2020 it was the Blue and Purple routes which were mostly affected with other broken-down vehicles causing some delays while a power supply issue was also disrupting things in the evening.

Services started to suffer from disruption from the start of the day with the Purple route being suspended from mid-morning. The Blue route was also experiencing significant delays from 1100 with other road vehicles causing some of the issues as a result of the tricky road conditions. It was a confused picture at times during the day with the Blue route running from Malin Bridge to Herdings Park and Malin Bridge to Sheffield Station for periods with the section through to Halfway seeing a very limited service for much of the day.

As the evening arrived – and with staff now having difficulties getting into work – a further limited service was able to run although Herdings Park was able to be served from the early evening with trams initially running through to Malin Bridge. Then from 1900 trams started to run through to Halfway again with Stagecoach Supertram tweeting that they had four trams running on the complete Blue route but that there were power issues particularly in the Birley area.

Whilst there were all these problems for the Blue and Purple routes both the Yellow route and the Tram-Train service were able to run throughout the day, albeit with delays and the odd cancellation. With the trams still struggling to run a service city buses were suspended from lunchtime with the current stay at home message even stronger than ever as a result of the snow. 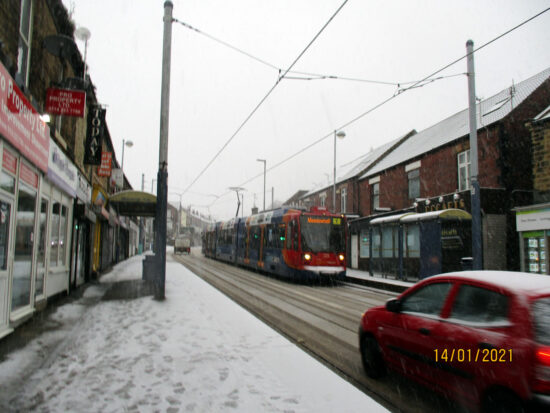 125 – the last of the Siemens-Duweag built trams – is seen in the snow at Hillsborough Park as it heads a Yellow route service to Meadowhall. 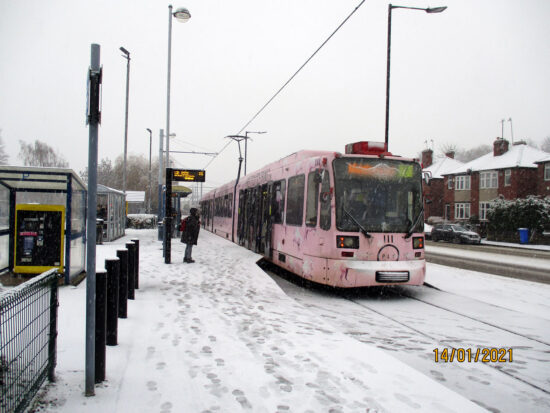 At Middlewood where a lone passenger stands on the cold snow bound platform with 111 waiting for departure. 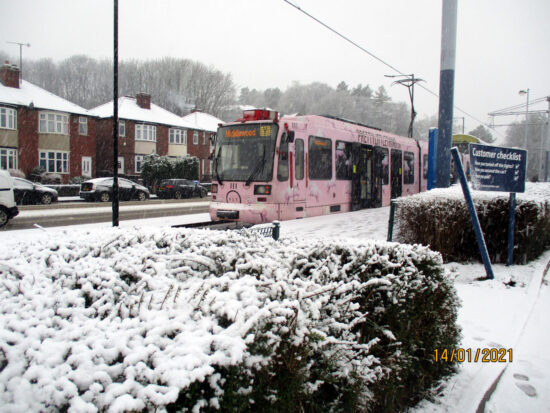 Another shot of 111 standing at Middlewood. 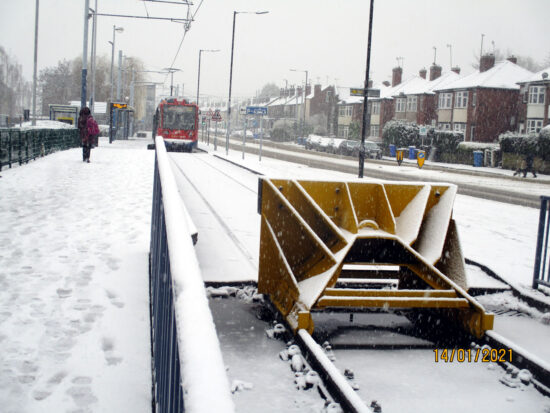 114 is seen through the snow at Middlewood. (All Photographs by Stuart Cooke, 14th January 2021)