Posted on Wednesday 6 January 2021 by Gareth Prior

Throughout this series so far we have been concentrating on first generation tramway infrastructure which is still standing, but there are also some more recent items which are no longer in use but still remain. And we are going up-to-date in this edition of “Still Standing!” as we take a trip to Oldham.

Oldham Town Centre has featured in this series before, but that was to take a look at some first generation rosettes still found on the walls of some buildings in Union Street. This time we are a bit further out of the town centre on the way to Rochdale where some tram track remains in the middle of the road from the original alignment through the town on the old railway line. When the Oldham and Rochdale Metrolink line originally opened in June 2012 services ran on the old railway line alignment as far as Oldham Mumps with an extension through to Shaw & Crompton following in December 2012. It was from this date that the now abandoned track was first used and it would continue to be used by all trams travelling beyond Oldham until 18th January 2014 when this alignment would be closed in preparation for the opening of the current Oldham Town Centre line.

Although the connection of the track from the old alignment was severed a section of track on Oldham Way/Lees Road remained in place with presumably it decided that the disruption it would take to remove this track in the middle of this busy road junction not worth it. 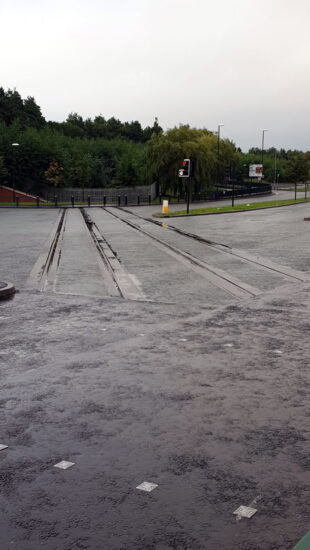 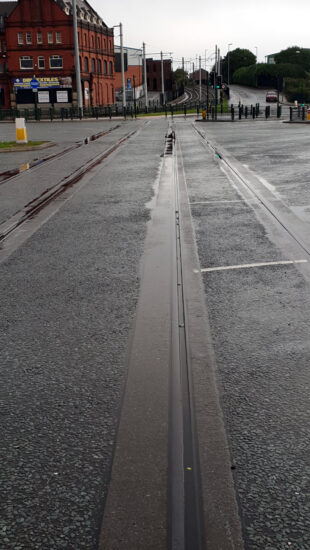 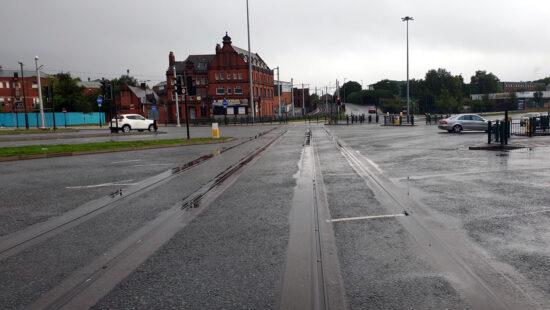 Images showing the Metrolink track in place in the middle of the road, which last saw trams running on it in January 2014. (All Photographs by Dave Jones)

This entry was posted in Manchester Metrolink, Still Standing!. Bookmark the permalink.