For the first time in around nine months we can report on a new vinyl wrap advert on a tram on Manchester Metrolink! Not since before the pandemic really got a hold of us all has a new advert been seen (3073 for intu Trafford Centre and 3091 for Go North Wales received ads in March) but that has all changed with 3117 receiving a yellow design advertising Cyberpunk 2077 – a new video game due for release later this month.

The yellow background of the advert merges nicely with the standard fleet livery yellow of the trams but with the fleet numbers remaining white and the usual black section not being present it does mean that the latter two numbers of the trams are difficult to make out. The design is very simple with very limited signwriting advertising the game as well as its planned release date of 10th December.

This is the second advert that 3117 has carried. It advertised Manchester College between October and December 2016. 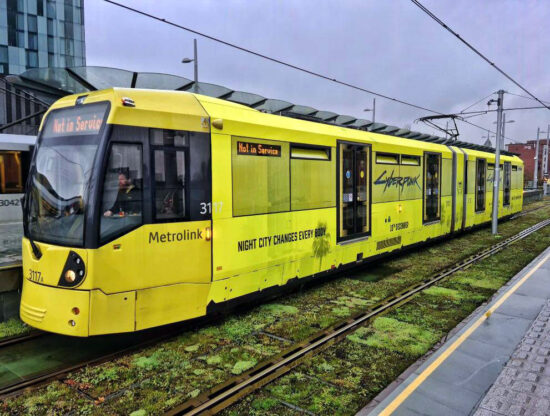 3117 waits at the centre platform of Deansgate-Castlefield with its new advert being shown off. (Photograph by Ian Freestone)