Work on the laying of track around Ocean Terminal on the Trams to Newhaven project has been continuing on this first tangible sign of constriction for the extension of the current line between York Place and Newhaven. Since we last saw images from this location more track has now been laid – on both inbound and outbound track – as it is confirmed that a slight redesign will also see the retention of the Discovery Garden next to the shopping centre.

The Discovery Garden is alongside the Ocean Terminal Shopping Centre but had been due to be removed as part of a change to the public realm in this vicinity. However, new owners of the shopping centre, Ambassador, along with the Tram to Newhaven project team and community leaders have got together and have agreed to a redesign which will see the popular garden retained.

Speaking about this redesign, Cllr Adam McVey, City of Edinburgh Council Leader, said: “We know how strongly the community feels about this local greenspace, so I’m delighted that Ambassador and our Trams to Newhaven team have been able to secure its future as part of the site’s redevelopment. Once complete this scheme will deliver a great many benefits to Leith, offering quality, sustainable transport, unlocking the area for housing and economic development. We want everyone to share in this, while retaining the local features that residents know and love, so I’m pleased we’ve reached a solution.”

Jennifer Marlborough, Secretary of the Leith Harbour and Newhaven Community Council, added: “Leith Harbour and Newhaven Community Council is very pleased and relieved to hear that Discovery Garden is to be retained. We have worked hard, alongside local residents and users of the Garden, to ensure that the cultural and environmental value of this small park is not lost in the midst of development. This is particularly important in an area already largely devoid of green and community spaces. We thank Trees of Edinburgh, #SOS Leith and the local community for their help with our campaign. We now look forward to continuing to work with the Trams to Newhaven team and Ambassador Group, the new owners of Ocean Terminal, to properly secure the Garden’s future.”

The complete Trams to Newhaven project is due to be completed in 2023 and as we saw earlier this month the first tracks on the entire extension were laid in early November and this progress has continued as the month has gone on. Whereas last time there was just rail on one track there is now some on both the inbound and outbound tracks. Work in this location is due to be completed in spring 2021. 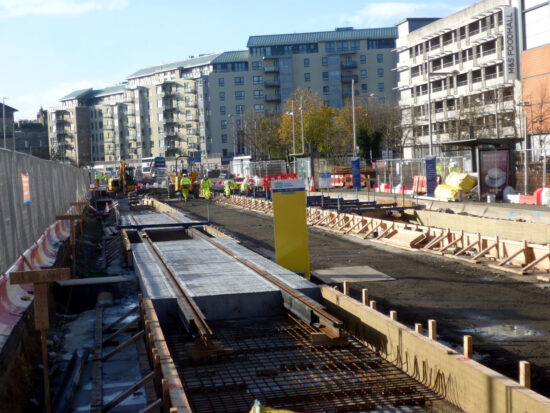 This view is looking towards the Newhaven terminus at Ocean Terminal. All the bus stops here are out of use with temporary stops provided around the corner beyond the multi storey car park on the right. The shopping centre is out of view to the right of this shot and the Discovery Garden is beneath the group of trees in the middle distance. The tramline will turn sharply right past the multi-storey car park and the flats of Portland Gardens in the centre background. 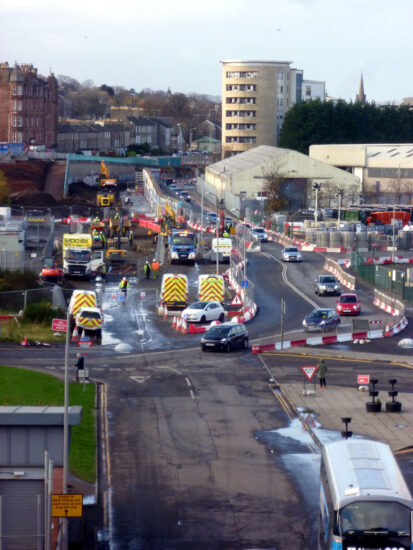 This image is taken from the Ocean Terminal car park and is again looking towards Newhaven terminus (which will be to the left of the modern tall apartment building which fronts onto Lindsay Road. There will be a secure overnight stabling area for a tram overnight just beyond the platforms (thus avoiding unnecessary mileage to and from the depot). Lindsay Road saw trams until 1956 before abandonment and the activity here is actually on reclaimed land with until the Second World War the shoreline coming right up to Lindsay Road. There are two graffiti covered concrete retaining walls in the middle of this image (either side of the JCB); these were built during first the abortive scheme to bring the tramway to Newhaven and should (unless plans change) be supporting the ramp up to the level of Lindsay Road. 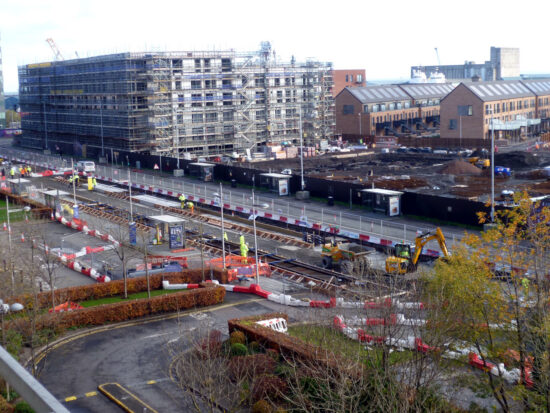 Looking north east over Ocean Drive with the shopping centre out of sight to the left. The houses and flats of Cala Homes’ Waterfront Plaza are rapidly being built in the distance giving ore potential passengers for the tramway when it opens. The tramline to the city centre will turn sharply right just beyond the apartments covered in scaffolding. Here we see rails have been laid on both tracks. 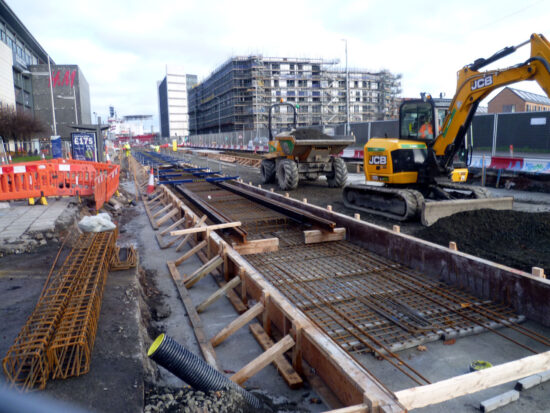 The final shot is taken at ground level and is again looking north east. The shopping centre is on the left with the Waterfront Plaza housing development to the right. The tall white building is Ocean Point office block which is partly home to Visit Scotland. The Royal Yacht Britannia is behind the far end of the shopping centre where a vertical distillery (called Port of Leith) is also being squeezed in by 2022. The trams to the city will turn sharp right between the flats and Ocean Point. (All Photographs by Roy Calderwood, 13th November 2020)