Posted on Monday 2 November 2020 by Gareth Prior

For some time in Blackpool a number of the Flexity2 trams have been out of service with none of 004, 007 and 012 having been noted in use for several months and for 007 it has been over 12 months since it last ran. But this list can be reduced to two again now as 012 has recently returned to action.

With a reduced service running on the Blackpool Tramway over the past few months and (no service previous to that) the absence of these three hasn’t been felt too badly but the return to action of 012 will be beneficial allowing the trams – which have now been running for over eight years without any significant workshop attention, lets remember that the Nottingham Express Transit Incentros which are 16 years old are going through their second refresh currently – usage to be more evenly spread. 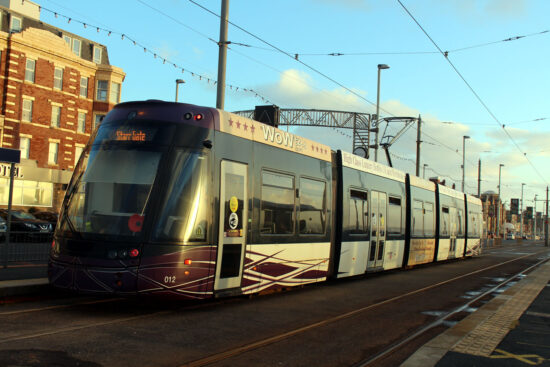 012 stops at Cabin with a southbound working to Starr Gate. Looking none the worse for wear for its time out of service it retains adverts for Wowtels and also had poppies added to the cabs. (Photograph by Tony Armitage, 31st October 2020)