Posted on Friday 23 October 2020 by Gareth Prior

For the next few editions of the traditional tram “Picture in Time” we take a trip to Leeds for some fascinating images taken as the days of the tramway were coming to an end in November 1959.

In this first photo we see Horsfield car 165 running up Kirkgate working a route 18 service to Crossgate on 1st November 1959. The Leeds system only had a further six days of operation after this photo was taken with the last services running on 7th November 1959 but despite that – or maybe because of – this tram has a healthy load of passengers on board. For those familiar with sister car 180 at Crich the front adverts for Stylo will be familiar with the tram also having a side advert for Melbourne Ales (the same company that can be seen on the side of 345 at Crich today). 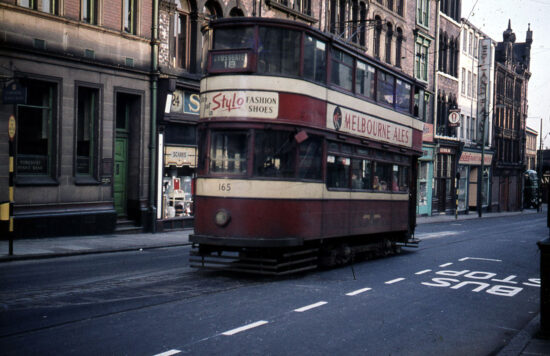