Posted on Wednesday 21 October 2020 by Gareth Prior

Today we are heading off to the Docklands Light Railway for another archive image.

Again, taken on 4th November 2003 this time we are at Limehouse where two units of different classes are working together on a service although the reflections of the light make it unclear where they are heading to! The front train is a B2K class, no. 13, and it is joined by a B90 class, no. 41. The B90s were built in 1991-92 by BN Construction in Brugge (a company which would become part of Bombardier) and are the oldest trains remaining in service although will be replaced by a new fleet of trains from 2023. Also of note in this image is that whilst 13 has white doors you can just make out in this photo that 41 still has red doors of an earlier livery. 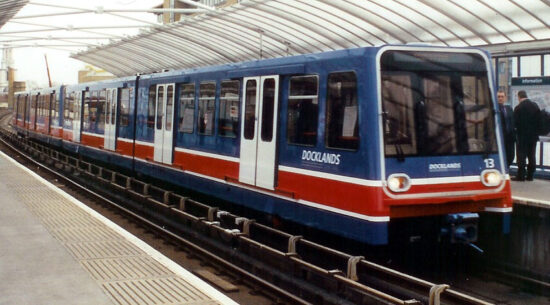