In Pictures: E-on all over advert for NET 213

Not previously featured on these pages is a new all over advert now been carried by Nottingham Express Transit Incentro 213 (we say new but as we don’t have any source of information from Nottingham to be honest this advert could have been in place for the best part of a year!). The advertiser on the tram is e-on, a company no stranger to advertising on Nottingham’s trams!

Unlike the previous full adverts that e-on have had in Nottingham this one features the standard fleet livery on the ends of the tram with the side of the tram then having full height vinyls, including contravision on all windows. The campaign this time around is for e-on’s Clean Air campaign.

This campaign not only includes this full advert tram but 212 and 215 are also featuring above window adverts along with the centre section having full height ads.

Meanwhile just five of the Incentro trams have yet to receive their second refurbishment. 202 (currently under attention), 209, 213, 214 and 215 are all still to be treated in the workshops. The latest of the trams to be completed was 207. 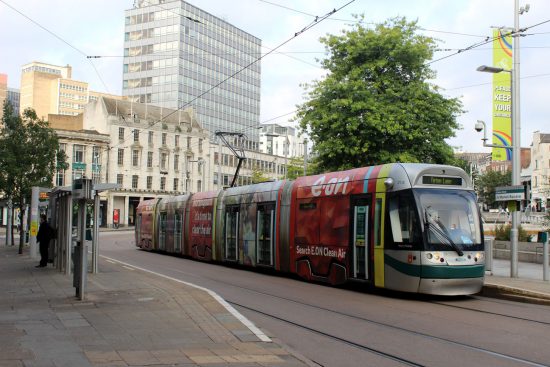