Whatever Happened To? Blackpool Trawler 737

Posted on Thursday 20 August 2020 by Gareth Prior

And so we reach the end of this series as we take a look at the last of the trams which ran in passenger service over the final weekend of the traditional Blackpool Tramway. That tram is the illuminated Trawler.

As we have seen in the previous two instalments of this series, the illumination tours on this final weekend went through a familiar pattern with the Western Train, Frigate and then Trawler being used. For the Trawler this meant that it too ran two tours on each night, the third and sixth tours. This meant that on Sunday 6th November 2011 it had the honour of performing the very last illumination tour of the traditional tram era.

Since 2011, the Trawler has been a semi regular sight on illumination tours but its smaller capacity does mean it will be third choice of feature cars. It has also spent a period of time off the rails, firstly undergoing an overhaul and then subsequently suffering from issues with its new LED illuminations. But by the end of the 2019 season it seemed to have put these issues behind it with more regular usage once again being seen. 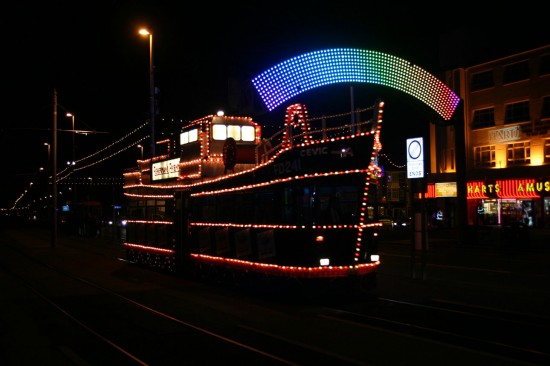 This is the penultimate night of the traditional tramway, 5th November 2011, with the Trawler captured at Bispham heading south. 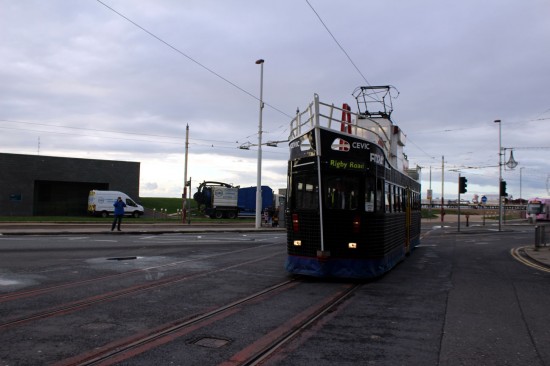 Non-illuminated on 29th September 2019 as the Trawler returns to depot after a period on daytime heritage tours during the September Spectacular weekend. (Both Photographs by Gareth Prior)

* “Whatever Happened To?” will return in the future from another time and another place!