Posted on Tuesday 4 August 2020 by Gareth Prior

After an understandable period where we haven’t seen many new adverts applied to trams on various systems around the UK, West Midlands Metro 19 has recently returned to service having lost its 20th anniversary livery in favour of adverts for Marks Electrical.

19 made its debut with the new adverts on Monday 3rd August having last been seen in service with the 20th anniversary vinyls a few days earlier on Wednesday 29th July. Of interest with this advert is that 19 still remains the only one of the 21 strong Urbos3 class of trams not to have a full blue livery as it has retained the hybrid silver/blue base livery with the adverts applied on top.

As we’ve come to expect on West Midlands Metro the advert isn’t a full all over advert with just the centre section receiving full height ads and the remainder of the tram just having the adverts above the windows. Part of the effect of the advert is also lost as when designed the ad didn’t take into account that the centre section has destination screens and as such part of the wording has had to be chopped off!

Marks Electrical has a showroom in Leicester as well as offering online sales and they specialise in kitchen appliances as well as having an audio visual department. The advert covers various products you can buy including washing machines, cookers, fridge freezers and televisions (different products shown on each side of the tram).

The advert is the first commercial advertising on 19 and replaces the 20th anniversary livery which was in place from May 2019. 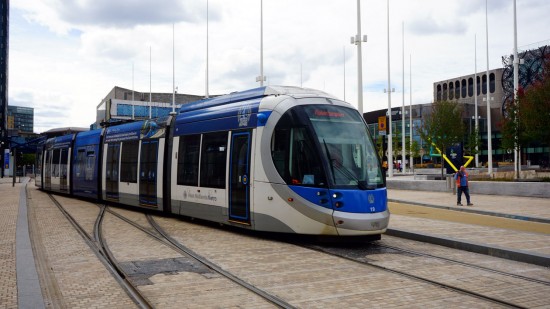 19 on its last day in service with its 20th anniversary advert – 29th July 2020. The tram is just departing from Library bound for Wolverhampton. 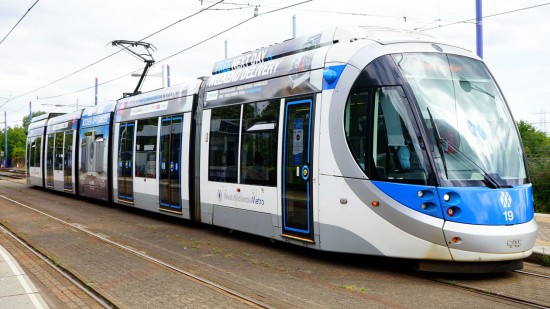 19 and its new advert at Wednesbury Parkway on 3rd August. This side features various kitchen appliances including a big washing machine! 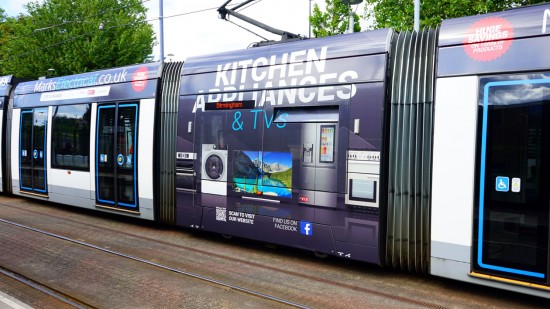 A close-up of one of the central sections. This shows the cut off writing to allow for the destination screen. (Photographs x3 by Andy Walters) 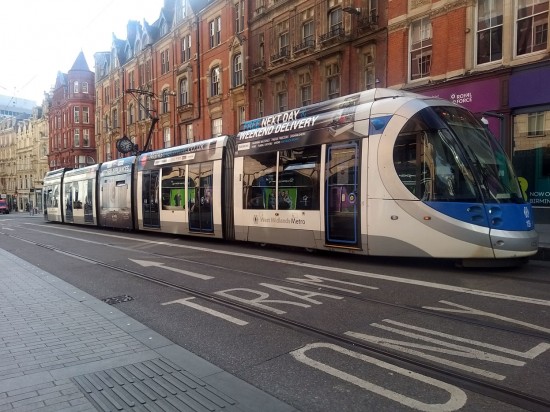 Another view of the tram. This time we are in Birmingham City Centre at Corporation Street. (Photograph by Mark Cufflin)