Whatever Happened To? Blackpool Twin Car 672+682

We now move on to the Twin Cars, with two examples of this class seeing use over the final weekend.

The first of these was 672+682, in its Orange and Yellow Line 1 Metro Coastlines livery, which although not out on Saturday 5th November would see use on the final day, Sunday 6th November. Used during the day on a Private Hire for Tramways Monthly, it was thought that when this ended that was it for “Set 2” but when Balloon 711 developed a fault on the evening service the Twin Car was summoned from depot and would end the day on public service. It would thus become the last of the class to run on the pre-upgraded tramway with it back to depot at 2343.

Since 2011, 672+682 has been a tram which hasn’t exactly had a quiet life! Retained in Blackpool after plans for it to go to Crich fell through, it was repainted in the original mainly cream livery for re-entry into service in 2012 and would then settle into fairly regular service on Heritage Tram Tours. That was until 24th September 2016 when an electrical fire broke out on the motor car as it climbed Gynn Hill. This was the last the tram saw use and it is now stored at Rigby Road. 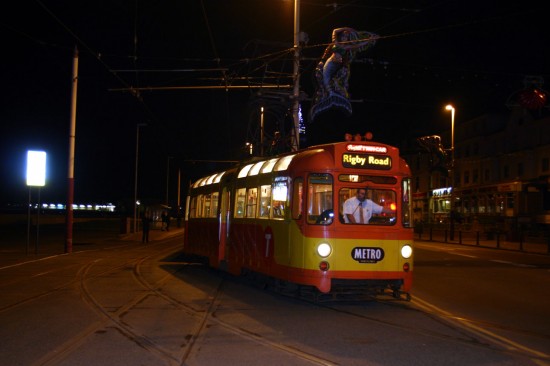 With the trailer out of shot, the motor leads set 2 back to depot on 6th November 2011. The last of the Twins to run on the pre-upgraded tramway. 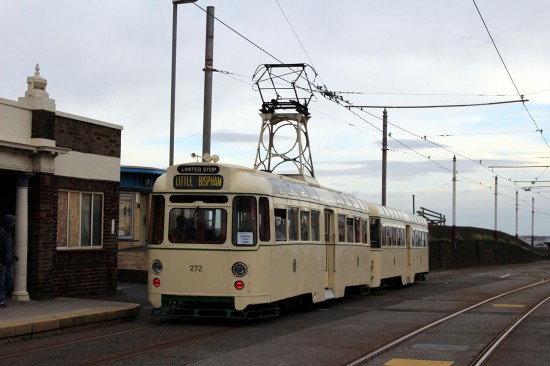 On 24th September 2016 – and its last full northbound journey before the fire – we see 272+T2 (led by the trailer) heading north past Bispham on the way to Little Bispham. (Both Photographs by Gareth Prior)

1 Response to Whatever Happened To? Blackpool Twin Car 672+682