Maintenance work resumes on the MER

With all services on the Manx Electric Railway having been suspended since the end of Thursday 19th March there was a long period of complete silence on the line but now with a slight relaxation in restrictions on the Isle of Man, some engineering works have been able to resume – albeit with full social distancing in place for Isle of Man Railways staff and contractors.

Obviously, no trams are still able to run but that does mean that engineering works are able to be progressed – during a period where it would usually be a strict no-no as the TT fortnight would be in full swing and the line would be at its busiest. Contractors have been employed to complete the relaying of track on both sides of Halfway House level crossing and have now moved on to the Laxey side of Groudle.

The in-house team have been completing routine maintenance along the complete line whilst the wire team have completely renewed the overhead fittings and wire between Ballabeg and the Douglas side of Lambs Crossing. The wire team have now moved on to the section between Lambs and Preston’s crossing. Overhead poles have also been painted around Bulgham Bay and on the Ballaragh Straight.

At Derby Castle Sheds and contractors have resumed work on recladding the bottom shed.

On the tram front, 33 has been out and about on the line, along with wagon 8 with the pair used to move station furniture at Laxey. 33 has recently had a partial repaint but still requires a little more attention to complete this work.

With this work taking place, anyone in the vicinity of the line is reminded that just because there is no passenger service currently they still need to be aware as an engineering tram may just be coming along – so pay attention!

There remains no word on a resumption of passenger services and it is likely to be some time before any consideration is given to that with the continued COVID-19 restrictions in place on the Isle of Man. 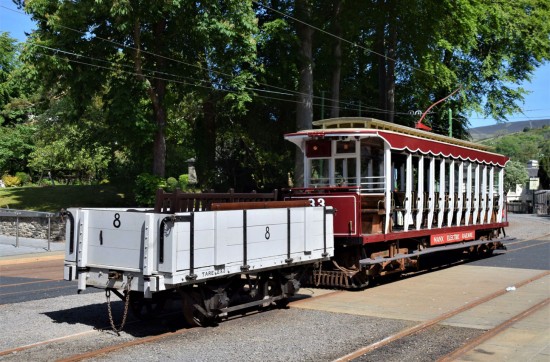 The newly partially repainted 33 is seen in Laxey Station with Wagon 8 for company. (Photograph courtesey of Manx Electric Railway Online)