Posted on Sunday 9 February 2020 by Gareth Prior

For one final time in this batch we head to the Isle of Man and the Snaefell Mountain Railway during 1979.

This week in fact we feature the very same tram as we did last week – no. 2. As with all the passenger trams which have travelled up Snaefell over the past 125 years, 2 can trace its history back to 1895 when it was built by G F Milnes in Birkenhead before being shipped over to the Isle of Man. A mere 84 years old when this photo was taken, 2 looks very much as it does today in this image at the Summit alongside the café/hotel with the traditional teak and red livery style in evidence. Judging by the lady on the far left of this shot there may be a blue sky but it is still a chilly day at the highest spot of the Isle of Man. 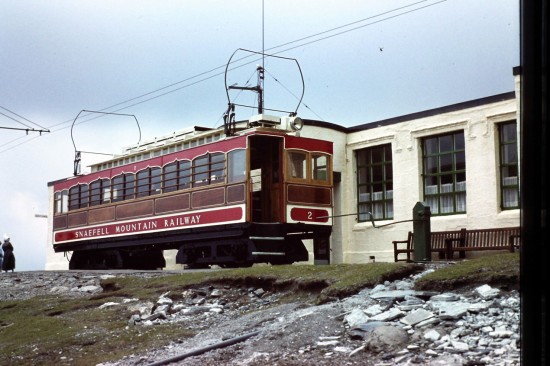