Posted on Thursday 6 February 2020 by Gareth Prior

We are heading back to Blackpool for today’s archive image as we feature not one, not two, not even three but four trams at Fleetwood Ferry.

This is very much the Fleetwood of days gone by with three trams sitting in the loop on Fleetwood Esplanade (all high capacity Balloon cars) and a further tram on Bold Street (Brush 630 in an advert for the Pleasure Beach). Crowds of people can also be seen in front of the parade of shops on the Esplanade – scenes which you will rarely see today.

The date of this image is 28th October 1990 and all three Balloon Cars are still trolley fitted with the first and third trams still having roof windows. While we can’t easily identify the three Balloons the central example is of the second series of trams (those delivered with roofs to start with) as can be seen from its trolley arch. It appears that the back tram is 704 – a tram in the new at the moment of course having started its restoration in the workshops at Rigby Road and for the central tram we can make out the 7 and the 2 but not the all important last digit! Note all Balloons have “T” adverts including one for Miss Blackpool 1990 – not something you expect to see advertised on public transport so much in the 21st century! Two different livery styles are also seen with the 1980s version on the first two trams.

This image was taken from the North Euston Hotel. 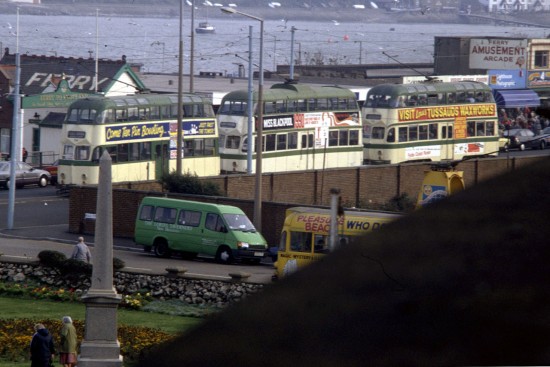 4 Responses to Picture in Time: Busy times at Fleetwood Ferry