Blackpool 31 leads the way at Beamish

Posted on Tuesday 14 January 2020 by Gareth Prior

If ever you needed an example of how hard working the trams are at Beamish on a year by year basis you only have to look at the latest mileage figures released on the Beamish Transport & Industry Blog with over 25,000 miles covered during 2019. Top of the list was Blackpool 31 which alone covered 6,000 with Sheffield 264 and Sunderland 16 not far behind.

Blackpool 31 is a popular tram at the museum, with its high capacity used all way year round – even if the weather may not exactly be conducive to an open top tram ride! 31 was available for service throughout 2019 which also helped to make it the most popular tram during the year.

Two other trams travelled for more than 5,000 miles – Sheffield 264 (5,850) and Sunderland 16 (5,300). The figure for 264 is even more impressive when you consider it only re-entered service in late April following a wheelset and motor overhaul, likely meaning if it had managed the full year then it may well have challenged 31 for top spot!

Of the other two resident trams, Newcastle 114 managed 3,575 with Oporto 196 covering just 2,775 miles. 114 was available for the whole of 2019 but wasn’t always first choice with Blackpool 31 the preferred open topper for much of the year (its that high capacity again!). The Newcastle car is now out of service, having been withdrawn on 6th January, for a motor overhaul which is planned to be completed by the start of the main season.

Oporto 196 was often the car of last choice – decent weather, visiting trams and its lower capacity all probably contributing to its lower figure than the rest of the fleet but 2,775 miles is still a pretty impressive figure! 196 is due to be withdrawn from service at some point in the early part of 2020 as it is due re-tyring, a truck overhaul and attention to its body. Work will now start on the tram, however, until Gateshead 10 is finished which will allow the Oporto car to remain available for static educational activities.

The two visiting trams at Beamish in 2019 also contributed to the just over 25,000 miles travelled. The first of the duo to arrive, Manchester 765 from Heaton Park, managed 500 miles until it left in June with Blackpool & Fleetwood 40 putting in 1,250 following its arrival from Blackpool until it left to return to Crich in August.

Work has continued on two trams in the workshops over the year with both Oporto 65 and Gateshead 10 seeing attention. The Oporto coal tram has been making what has been described as “steady progress”. It was lifted to allow an inspection of the truck and the Beamish Tramway Group have rewired 65. Some minor bodywork repairs are required and the overhauled controllers will also need to be refitted once this is done. The tram is now back on its truck and wiring will now continue before the trolley gantry is repainted. The plan is then that it will undergo brief testing in the depot fan. A further lift of the tram will follow for more attention to the truck, which will be done at the same time as 196 has been lifted to allow the two to be overhauled together.

As for Gateshead 10 the tram is still under overhaul and work is now progressing to the point where the trucks can be wheeled to allow fitting of the motors and brake hangers. 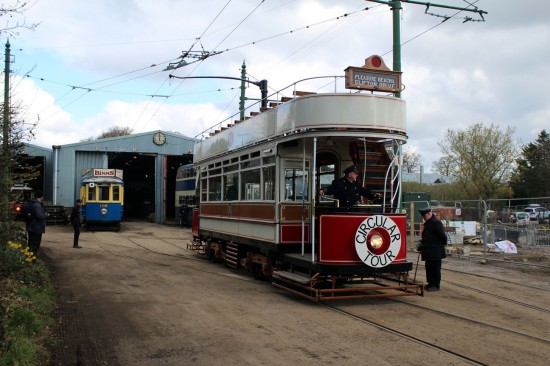 The highest and lowest mileage trams in the resident Beamish fleet for 2019 are seen outside the depot on 13th April as Blackpool 31 enters service and Oporto 196 waits. (Photograph by Gareth Prior)