We return to the Blackpool tram photo archives tonight as we head back to the 1980s and a take a look at one of the iconic Balloon Cars.

Its October 1983 and with trackwork taking place on the crossover at Cabin Balloon 703 carefully makes its way south with a service to Pleasure Beach. One of the workmen is keeping a close eye on the tram as it makes way over the track and it hasn’t taken too long for the rest of the work crew to resume working behind the tram. With Corporation crests on the lower panels the tram has yet to receive the attractive 1980s fleet livery but does feature the single destination screens, in fact 703 (as 240) had been the first of the first series Balloons to lose its double destination screens in August 1956. The trolley was still in place at this time with the tram not seeing a pantograph for another eight years.

Having been preserved the tram spent a period of time on loan at Beamish where it ran in the guise of “Sunderland 101” but is now back in Rigby Road Depot where it is one of the trams waiting for some workshop attention before it can be considered for a return to the rails. 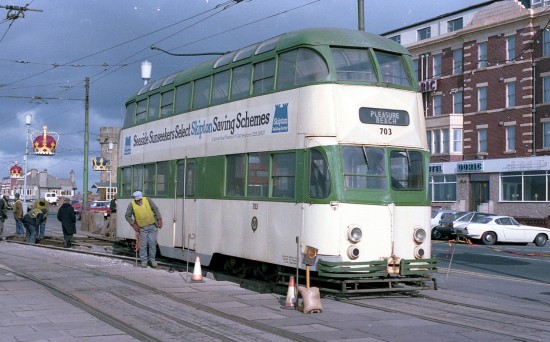