Posted on Thursday 10 October 2019 by Gareth Prior

We take our final trip to the 1973 Transport Extravaganza at Crich for this latest edition of Picture in Time with a shot of two trams no longer part of the operational fleet.

Here we see Blackpool & Fleetwood Rack 2 on the right hand side of the two track layout at Town End with Sheffield 264 stabled on the other track with 2 looking set to be operating the next service up the line. 2’s career at Crich had started back in 1964 when it became the very first tram to run under electric power at the museum on 6th June and it was a regular performer at Crich for the best part of the next 50 years or so. This included spells in the workshop and also a couple of spells on loan back to Blackpool. Withdrawal came in 2012 with the tram missing the 2013 season before recommissioning for 2014 when the 50th anniversary of electric operation was celebrated. A further withdrawal came after this event and the tram was moved to a static exhibit although it was commissioned for use on one further day in 2018 at the annual enthusiasts event.

As for 264 it had arrived at Crich in 1960 and entered service in 1970 after some restoration work had taken place. It would only be operational until 1980 when it was withdrawn from service requiring further workshop attention. It has been a static exhibit ever since and is currently located at the back of the Great Exhibition Hall. 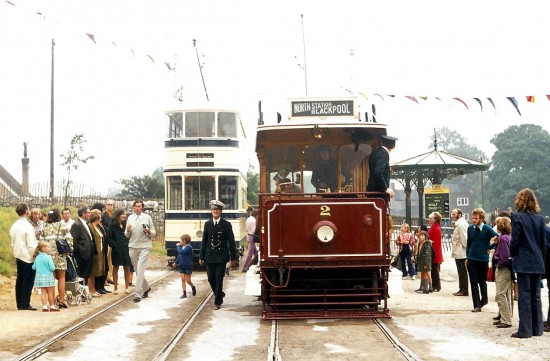 2 Responses to Picture in Time: Blackpool & Fleetwood 2 and Sheffield 264