Posted on Tuesday 8 October 2019 by Gareth Prior

Staying in 1990 for this week’s Picture in Time image from Blackpool we feature another one person operated tram but this time of the second generation of vehicles – Centenary 648.

Centenary 648 was originally built as 651 which was a testbed for experimental GEC equipment but after these tests were concluded it was subsumed into the main Blackpool fleet and re-entered service as 648 in 1990 and it is that same year that we view the tram in the below image. The tram is just passing the old and highly recognisable Lewis’s building between Tower and North Pier and is working a service north to Fleetwood. The tram is in fleet livery as carried by all Centenary Cars when new.

As 651 the tram had entered service for the first time in July 1985 and remained in service – after a sympathetic rebuild in 2006 – until the end of traditional tram operation in 2011. Originally planned to become part of the national collection at Crich this plan never came to fruition because of space issues but it was retained as a tram of interest in the heritage fleet and remains a valuable member of that fleet today. 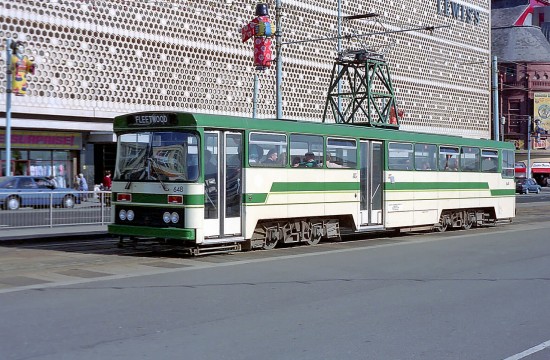