Posted on Tuesday 1 October 2019 by Gareth Prior

We leap forward from the 1970s to the 1990s for the next few weeks worth of Blackpool Picture in Time images and start off with a photo of OMO 5.

This photo was taken on 24th March 1990 and shows no. 5 on the old centre track at North Pier with the tram presumably working specials as it is blinded for Bispham. The tram is in Green and Cream, the 1980s version – one of only four OMO Cars to receive these colours and the following year it would get a green and cream repaint but into the 1990s style becoming the only OMO car to receive this.

5 had started off life as English Electric Railcoach 221 and was withdrawn from passenger duties in 1963 before becoming a Works Car (no. 5) and then the OMO conversion programme came a calling. Withdrawn from works duties in 1971 the tram was unveiled as the fifth OMO car in 1972, initially in Plum and Custard before it received Red and White and then two versions of Green and Cream livery. The penultimate OMO to be withdrawn it ran for the last time on 17th February and 1993 and has since become part of the national collection but remains stored at the off-site storage of Clay Cross where it has resided since June 2000. 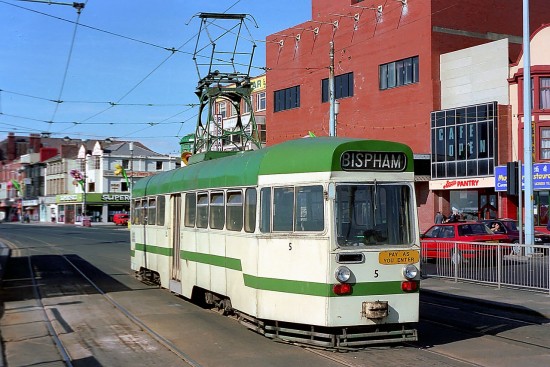