Posted on Tuesday 10 September 2019 by Gareth Prior

We stay looking at the Blackpool Tramway during the illuminations in the 1970s this week but this time there isn’t an illuminated tram in sight as we take a look at Little Bispham loop during the day with two very different trams in position.

Before the recent upgrade of the Blackpool Tramway Little Bispham loop has a spur leading off it onto the northbound line so that, if necessary, trams could run round the loop and continue north instead of being forced to go back south. This section of line was also commonly used to stable an engineering tram during the illuminations so that it could be on call in case something went awry on what were still very busy evenings. In this view it was Engineering Car 753 on duty – a tram set to return to service soon as Standard 143 of course – which is stabled with trolley on the overhead waiting to see if it would be needed.

Also present in this image is one of the 13 strong class of OMO cars with the crew chatting before they have to head back south along the tramway. The tram seems to be 9 which was in the Red and White livery still running with a trolley and with small adverts applied to the bodyside either side of the Blackpool Corporation Tramways crest. 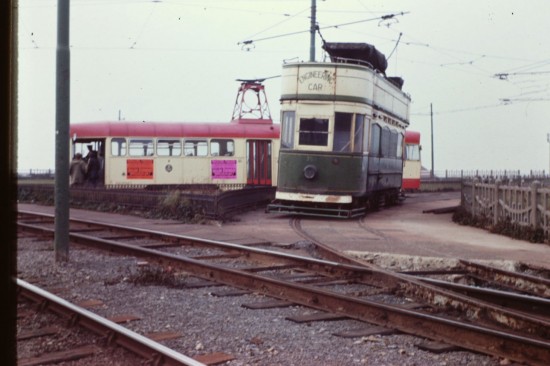